Kotake Ieshiro (家 城 幸 武) is a little known author who wrote two books on Karate: Anata no mi o momoru Karate Gokui Kyohan (1955) and Zukai Setsumei Karate no Naraikata (1961). In this article we will examine the first text, in particular the 1958 edition.
The book is very similar in structure and content to other texts published in the same period. A quick analysis therefore makes us understand which topics were considered fundamental for the time, in a Karate book, and / or what the interests of practitioners were.
The various chapters deal with the following topics:
-Introduction
-What is Karate
-Karate history
-Schools of Karate
-Current situation in the world of Karate
-Value of Karate
-Technical part (techniques, positions, training methods, makiwara, equipment, etc.)
-Basic kata
-Kihon-gata (Ten no kata 天 之 形 表)
-Kata Heian / Pinan shodan
-Kata Heian / Pinan nidan
-Kata Kibadachi / Naihanchi
-Kata Bassai / Passai
-Kumite
-Pressure points
-Self defense for women
-Secret of Karate
As for the chapter on Karate schools, the author quickly explains the characteristics of the Shorin and Shorei styles, and then mentions the existence of the three cities where the Shuri-te, Naha-te and Tomari-te styles developed. However, if we take into account the numerous customizations, says the author, there are an infinite number of styles. However, soon after he mentions the two styles which, according to him, are best distinguished from the others, namely Miyagi sensei's Goju-ryu and Mabuni sensei's Shito-ryu. The author then goes on to list the following styles: Funakoshi's Shotokan, Tatsuo Yamada's Nippon kenpo, Konishi Yasuhiro's Shizen-ryu, Otsuka's Wado-ryu, and Mabuni's Sorashin-ryu (Kushin-ryu). The last is evidently a mistake, since this was Ueshima Sannosuke's school.
In the chapter concerning the current situation in the world of Karate, the following dojos, styles and schools are mentioned, also including the address and other data:
-Nippon kenpo kenkyukai: founded by Yamada Tatsuo, who was a student of Funakoshi and a practitioner of Judo.
-Shudokan: founded by Toyama Kanken, a pupil of Itosu and Higaonna.
-Kanbukan: founded by Mitsuo Seki, a pupil of Toyama and Mabuni.
-Shotokukan: founded by Hiroshi sensei, a pupil of Oshiro, Hanashiro and Tokuda.
-Natsubukan: founded by Konishi Yasuhiro, a student of Motobu and practitioner of Koryu Jujutsu. The school is called Nippon kenpo Shizen-ryu.
-Wado-ryu: founded by Otsuka Hironori, a practitioner of Jujutsu, and a student of Funakoshi and Motobu.
-Shotokan: founded by Funakoshi, a student of Itosu and Asato, as well as a successful pioneer (of Karate) in mainland Japan.
-Yoshukan: founded by Mabuni, a pupil of Itosu and Higaonna. He has also studied every bujutsu school of Okinawa. 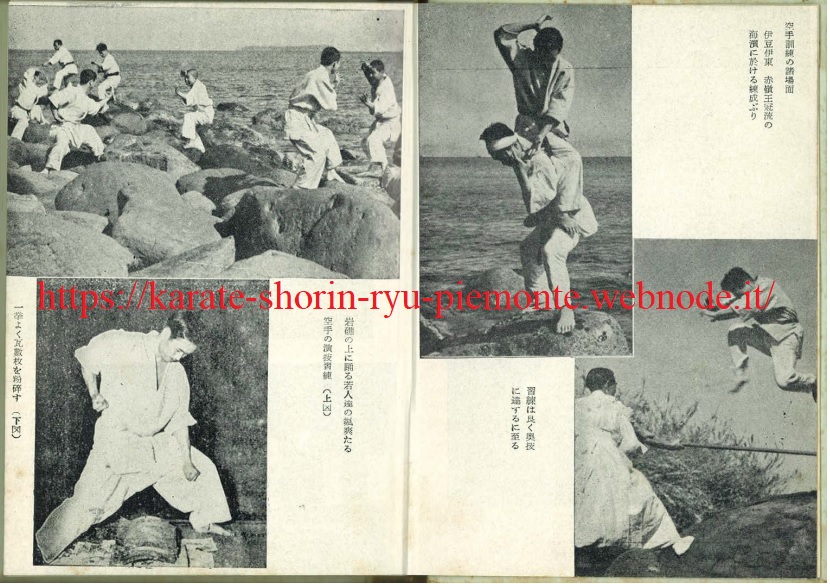 In the technical part, the part relating to the positions is noteworthy:
-kokutsu-dachi: performed as in Funakoshi's Karate Nyumon (1943), ie as the ukiashi-dachi / nekoashi-dachi Shorin-ryu (article here).
-zenkutsu-dachi: performed with the front foot turned slightly inward, as in some Shorin-ryu schools.
-kiba-dachi: performed like naihanchi-dachi, but with greater distance between the feet.
In the part dedicated to kata, the author cites four fundamental kata with some comments reported here in brackets: Pinan (created by Itosu sensei), Naihanchi (kata that has been practiced since ancient times), Sanchin and Tensho (kata reformed by Miyagi sensei) ). Immediately after we find a series of drawings and captions relating to Funakoshi (written Tominakoshi 富名腰)'s Ten no kata (written 天之形表). Here the author explains that it is not a traditional kata, but rather a basic kata, designed for beginners and children. Other kata that are presented with drawings and captions are the first two Heian / Pinan, Kibadachi / Naihanchi shodan and Bassai / Passai (albeit with only two illustrations).
In the section relating to the Heian (Pinan) shodan kata, we find written in the description that once this was the second Pinan, then Funakoshi reversed the two kata to favor beginners. While in the section relating to the Heian (Pinan) nidan kata we find the same concept reiterated, namely that this kata was once the first Pinan, and that it was Funakoshi shihan's idea to invert the two kata, since the second Pinan was the simplest .
As for the Naihanchi kata, the author tells us that it was the kata in which Motobu sensei excelled, and that Motobu, who had died at over 80 years of age, was known to practice only one kata (theory denied several times, but very widespread at the time).
The section relating to kumite does not concern combat intended as sparring, but a series of exercises to be performed with a training partner, where basic techniques or applications of the various kata are applied. The author specifies that, before moving on to train kumite, it is necessary to know kata.
In the book, and in this case in the technical part, we find the following kata mentioned:
Pinan (Heian) 1-5
Naihanchi (Kibadachi) 1-3
Kusanku (Kanku) dai and sho
Passai (Bassai) dai and sho
Wanshu (Empi)
Chinto (Gankaku)
Jitte
Seishan (Hangetsu)
Jion
Rohai (Meikyo)
Sochin (Hakko)
Niseishi (Hatsuun)
Wankuwan (Hito)
Chinte (Shoin)
Jiin (Shokyo)
Gojushiho (Hotaku)
Taikyoku 1-3
Ten no Kata
Chi not Kata
Jin no Kata
Two noteworthy details are the fact that:
-except for a few hints here and there, in the book there is very little talk of Okinawa and the Okinawan situation, giving instead a lot of space to the Japanese Karate world of the time.
-the numerous drawings in the book are not made with the same style, and seem instead copied on the basis of some photographs that appear in other books. Despite this, from a comparison I made on some captions accompanying the "copied" drawings, the text is different from the "original".