Before continuing, I would like to delve into some details of this latest Chinese mission, in particular some interesting details on the sapposhi Quan Kui / Zen Kai 全魁.
First of all, its title in Japanese is written 侍講 / 侍讀, which means imperial tutor, or tutor of a crown prince, which is the equivalent of the title that appears in Chinese documents, that is 侍讀 / 侍读, which means royal teacher  / imperial teacher, which is a degree that covered several tasks, which varied from one dynasty to another, including publishing.
As already seen, this is the famous Chinese delegate who led the diplomatic mission to Okinawa in 1756-1757, during which King Sho Boku (1739-1794) was crowned. Of Manchu ethnicity [(尼吉哩氏) Nijili clan, (字斗南) letter dòunán, (號穆齋) number mùzhāi, (满洲镶白旗人) member of the Manchu-bordered White Flag (the Eight flags were administrative / military divisions under the Qing dynasty in which all the Manchu families were included)], Quan Kui was an imperial tutor at the Hanlin imperial academy, which formed the Chinese imperial officers, and which had been established in 738 AD by Emperor Xuanzong (Tang dynasty). During the voyage to Okinawa, his ship was wrecked on the coral reef near Kume-jima, where they erected a Taoist temple in favor of the marine deity "Mazu", in thanks for not having suffered human losses during the accident. The diplomatic mission led by Quan Kui had to return to Fuzhou, from where he left for Naha with a new ship. Quan Kui and his entourage, after carrying out the ceremonies in Shuri, remained in Okinawa for seven months (Chinese documents say 227 days), waiting for the favorable wind. From the Chinese documents it emerged that the diplomatic mission also had the purpose of cultural propaganda, in particular in the fields of medicine, literature, calligraphy, music and even food culture (a demonstration of martial arts is therefore also plausible). As we have already said in the previous article, we also know that there were riots and fighting between some members of the Chinese embassy and some Okinawans, and that the Chinese emperor punished those responsible (Chinese), in some cases even with death.
WHY QUAN KUI IS SO IMPORTANT?
Some historians have linked him to the character Kusanku, the famous Chinese martial artist mentioned in Oshima Hikki. This is because the part of the text relating to Kusanku is preceded by the transcription of some documents and poems of Quan Kui, but also because folklore says that Kusanku visited Okinawa at that time, and Quan Kui's mission is the only plausible one, being the precedent in 1719. Although at first I also believed that Quan Kui could be Kusanku, I had to re-examine the data due to new information that emerged from the investigation. 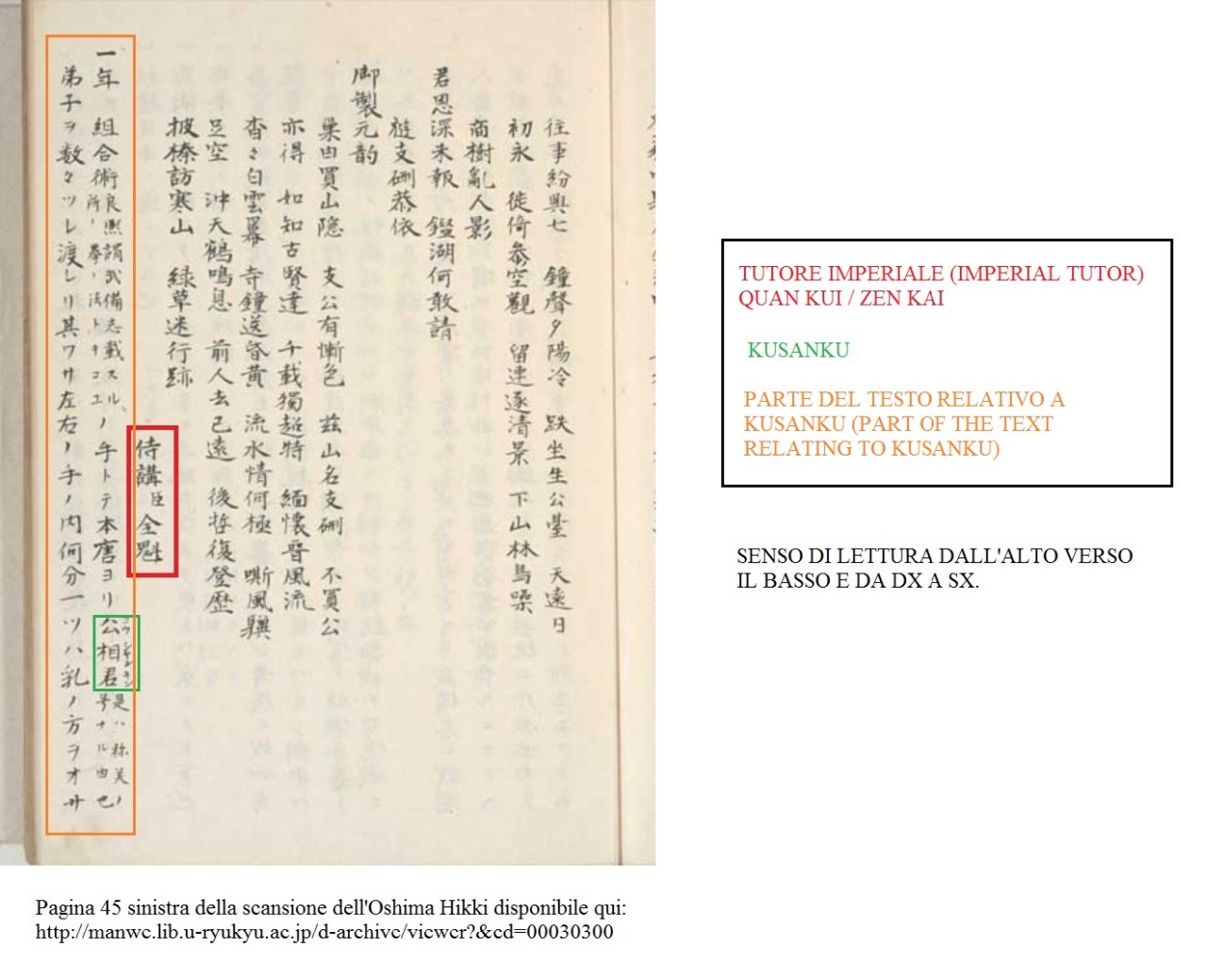 As can be seen from this scan, the word "imperial tutor Quan Kui" is located to the immediate right of the part where they speak of Kusanku (here written Kushanku). In reality, this is the signature placed at the end of the text shown even further to the right. Text and signature are the transcription of an original Quan Kui makimono.
FOREWORD, WHAT IS OSHIMA HIKKI 大島筆記:
The Oshima Hikki is a collection of notes written in 1762 by the Confucian scholar Tobe Yoshihiro. In that year, a ship from the Ryukyu Kingdom (today's Okinawa prefecture) set out in the direction of Satsuma (today's Koshima prefecture, in southern Japan), but was shipwrecked on the island of Oshima, in the province of Tosa (now the prefecture of Kochi ). During their stay on the island, the crew, and in particular Shiohira Peichin, spoke with Tobe Yoshihiro, reporting testimonies of their travels and their lives.
The Oshima Hikki contains various descriptions of the Chinese Empire, about 60 ryuka (Okinawan poems) and various anecdotes, including the one relating to Kusanku 公 相 君.
Unfortunately, the Oshima Hikki has two problems:
1-It is not organized internally, but is mostly a collection of notes.
2-All the text is written in "kanbun" 漢文, which is a form of ancient Japanese, written with a rich use of kanji and which uses Chinese grammar rules, which makes translation and comprehension difficult even by the most experienced.
KUSANKU AND QUAN KUI IN OSHIMA HIKKI:
If we take as reference the scan of the Oshima Hikki published by the Ryukyu University, we find the five columns relating to Kusanku between the pages of scans 45 and 46. One of the possible translations is:
“The other year, a man named Kushanku who was Chinese and was a Kumiaijutsu practitioner performed a public demonstration in which his students attempted to overwhelm him. With little effort the man used hand and foot techniques to overwhelm his much larger opponents.”
So why is it so difficult to identify Kusanku historically? Simply because Kusanku 公相君 is not a name, but a title that can be translated as a public official / government official.
Why is it unlikely that Kusanku was Quan Kui? Quite simply because Quan Kui is mentioned several times in the pages preceding the paragraph on Kusanku, but always and in any case with its Chinese title. It would make no sense to write the name 全 魁 Quan Kui for pages (always accompanied by various titles) and then, suddenly, to write a completely different, generic and nameless title (公相君 Kusanku) to describe the same person. While this is not overwhelming evidence of excluding Quan Kui from the list of "possible Kusanku", it is still a strong clue.
QUAN KUI IN CHINESE DOCUMENTS
Is the term imperial tutor found in other documents? Of course, as mentioned above Quan Kui is also defined with that title in some Chinese documents, for example 李调元 《雨村诗话》 亦云, that is 《Poems about the rain village》 Yiyun by Li Tiaoyuan. The text shows:
"乾隆二十一年丙子，大司马周文恭公同侍读全穆斋魁率奉命册封琉球"
which can be interpreted:
"In the 21st Qianlong (1756) year of bing, the grand officer / minister Zhou Wengong and the imperial tutor Quan mùzhāi Kui were ordered to legitimize (the reign of the) Ryukyu." 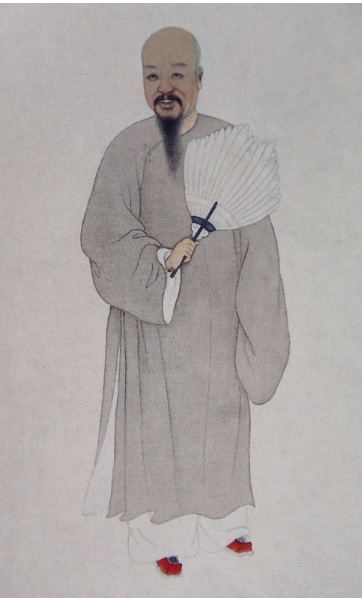 CONCLUSION OF THE IN-DEPTH
Although it was not possible to demonstrate a link between Kusanku and Quan Kui, the latter must have had a great impact on the court of the Ryukyu Kingdom, so much so that he was remembered and quoted years later by Shiohira Peichin, who must have had with him even a copy of his writings, otherwise their transcription in Oshima Hikki would not be explained.
TO BE CONTINUED...