Continuation of PART 4
Previously we stopped to talk about the sapposhi Quan Kui, but although he is less famous, I would like to dwell for a moment on his deputy, namely the Chinese diplomat 周 煌 Zhou Huang / Shuu Kou (? -1785).
Zhou Huang was born in Sichuan province, and passed the Chinese imperial examinations (jinshi) in 1737. He is known among researchers for being the author of the collection of notes relating to the Ryukyu kingdom, known as Ryukyu-koku shiryaku (in Chinese Liuqiu-guo zhilue). This collection tells the story of the small kingdom, including notes from previous Chinese envoys. The document is divided into 17 parts, spread over 16 volumes and mainly includes summaries of the reports of previous envoys, together with personal observations and commentary by Zhou Huang and a series of approximate images of famous places of the Ryukyu kingdom, maps of the islands and depictions of the habits, ships and other objects typical of the Ryukyu. 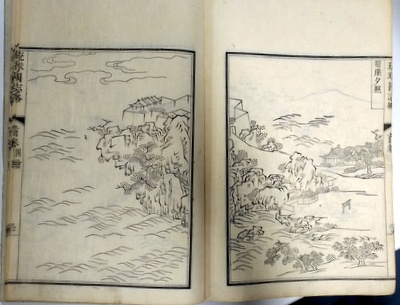 Naminoue Shrine, as depicted in a Japanese copy of Lihqiu-guo zhilue, printed in xylography in 1831.
The collection also includes an account of the traditional history of the Ryukyu, and meticulously describes the kingdom's tributary relations with China, as well as the Chinese investiture system. Zhou also described the government and administration of the kingdom, military and legal affairs, tax systems, customs and characteristics of the people. The report, however, is similar to what an ancient Roman could have done after observing the habits of a people considered inferior. In fact, Zhou represented the Ryukyu as a barbarian kingdom, lower than the high cultural standards of the Chinese empire.
The text was reprinted by the Tokugawa shogunate in 1831, and a copy ended up in the hands of the famous Katsushika Hokusai in 1832, who used the images in the book to make his Ryukyu Hakkei (Eight views of the Ryukyu), using the ukiyo-e technique. A translation of the Chinese text into modern Japanese was written by Hirata Tsugumasa and published in 1977.
As we saw in the article related to Quan Kui, following the riots that occurred in Okinawa during the visit of the Chinese embassy, many Chinese were physically punished, or sentenced to death; while Quan Kui was pardoned by the Chinese emperor, Zhou Huang was punished with the loss of his title. However, he retained his role at court, and in 1759 he was appointed teacher. He died in 1785.
Hokusai was not the only Japanese artist to study the works of Zhou Huang. In fact, the famous Japanese calligrapher of the Edo era, Ichikawa Beian, owned a rare copy of a handwriting by Zhou Huang. This calligraphic work was reproduced in the Shozanrindo shoga bunbo zuroku (Illustrated catalog of Chinese calligraphy, painting from the Shozanrindo collection), a catalog of his collections printed in wooden blocks. This work is now in the Tokyo National Museum.
TO BE CONTINUED...