Kata Pinan shodan, known in some Japanese styles as Heian nidan due to the reform of Funakoshi sensei, is a very widespread and practiced form. Taught both inside and outside the school environment by Itosu sensei and his pupils, it has undergone some transformations over time, which have fortunately been documented and handed down to us.
Chibana Choshin sensei represents Itosu's lineage outside the school Karate world, and his version of the Pinan shodan kata (available in the second volume of the Shorin-ryu Karate Encyclopedia https://www.amazon.com/dp/1797548328) is present today in the schools founded by his pupils. With the exception of the version of the Kyudokan school, which was probably modified by Higa Yuchoku sensei, the versions of the Shidokan, Shubukan, Shorinkan schools, etc., are practically the same.
Within the scholastic world, however, we find a real evolution of the form, which was also handed down by two of Itosu's most important students: Yabu Kentsu and Hanashiro Chomo. Since the latter did not teach at Shihan Chugakko, but at Okinawa Prefectural First Middle school (also known as Okinawa Prefectural Daii ichi Junior High school), he transmitted a simplified version of the kata, which however retained some elements of the older form.
As for the Shihan Chugakko, as I mentioned, it is possible to make a real reconstruction of the evolution of this kata, both thanks to the abundant presence of documents and thanks to the work done by other "colleagues". The masters we will examine are Funakoshi Gichin, Yabiku Motoku, Toyama Kanken and Miyagi Hisateru. Of Funakoshi we know that he learned the whole of the school kata thanks to the rapid course of one year, and not by attending the complete course that was held at the Shihan Chugakko starting from 1906 (https://ryukyu-bugei.com/? p = 1219); Yabiku studied from 1905 to 1910, thus having four out of five years available to study under the guidance of Itosu sensei and Yabu sensei; Toyama attended the course in the same years as Tokuda Anbun, that is from 1906 to 1911, thus having the opportunity to study five out of five years; the same goes for Miyagi, who, however, attended the institute much later, that is from 1911 to 1916. From this it can be easily deduced that all these masters actually studied little under the guidance of Itosu (and Yabu), in comparison with the students considered to be his heirs, in chronological order: Yabu, Hanashiro and Chibana. (Source: An Okinawan Living Legend: Choshin Chibana of Shorin-ryu Karate-do). 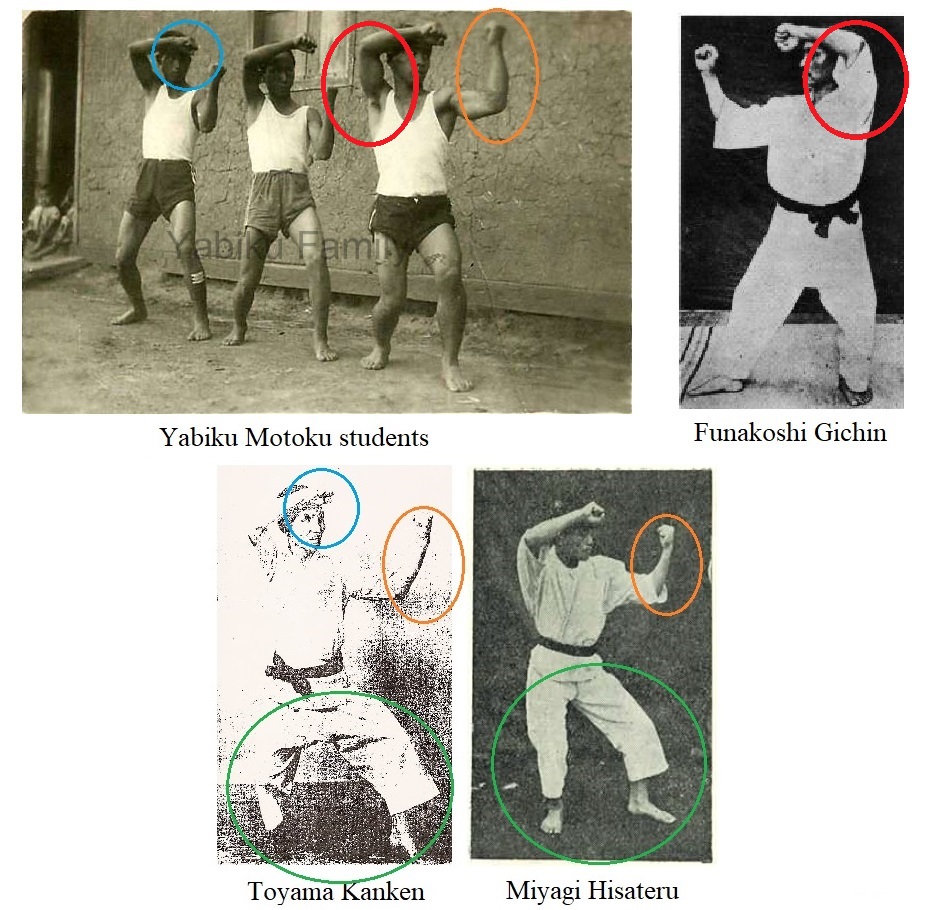 Looking at the image attached to the article, we can start from what we can consider the photo of the older version, that of a group of students of Yabiku sensei. From what can be seen, although it is a group of probable beginners (the positions and techniques are not identical), the position adopted is what is now commonly known as shiko-dachi, although other terms are sometimes used. This can also be deduced from the fact that another version of an elderly student of Itosu sensei also uses this position, I am talking about the version of Hanashiro sensei, which as I said, although simplified, has retained some elements, including the position of the legs (https://ameblo.jp/motoburyu/entry-12597534882.html). Other noteworthy elements of this version are: the use of the soto-uke for the advanced arm, the palm of the hand performing jodan-uke turned completely down, and the elbow totally raised. The position of the palm in jodan-uke is the same as that used also by Hanashiro, which allows us to hypothesize that it was the position adopted in one of the first versions of this kata.
The second version is that of Funakoshi. You immediately notice that some elements have changed, in particular the position of the legs (for more information: https://karate-shorin-ryu-piemonte.webnode.it/news/kokutsu-dachi-nekoashi-dachi-and-ukiashi-dachi-the-modifications-of-funakoshi/) and that of the most advanced arm. This last modification is not found in any other version, and therefore characterizes the Karate of Funakoshi and his pupils. It could therefore be an experimental modification later abandoned, or a variation conceived by Funakoshi himself for unknown reasons. Another variation that is not reflected in other versions is the position of the palm of the hand that executes jodan-uke, totally rotated outwards. Compared to the version previously examined, the position of the elbow of the arm that performs jodan-uke remains unchanged. Funakoshi, of course, was much older than Yabiku, but having followed the rapid one-year course, it is likely that he learned this form in the same years, or shortly thereafter.
The third version we will examine is that of Toyama, who was a year younger than Yabiku. In this version, compared to the first, the position is changed to ukiashi-dachi / nekoashi-dachi, the position of the elbow of the arm performing jodan-uke is lowered (closing the armpit more), but the position of the palm of the raised arm is the same, although with at an apparently less pronounced angle.
The latest version is that of Miyagi, who attended the teaching institute 6 years after Yabiku and 5 after Toyama. The position of the body is almost identical to the previous one, except for the fact that the palm of the hand performing the jodan-uke is oriented slightly outwards. In this, however, it differs from the Funakoshi version, where this rotation is total.
Hanashiro's version, as I have already said, was instead taught to younger practitioners, who attended another school. Consequently, at some point, Itosu decided to simplify it, eliminating the open hand techniques and replacing them with closed hand techniques (https://ameblo.jp/motoburyu/entry-12597534882.html). In conclusion, I would also like to point out that, as can be seen from the reconstruction made, while Hanashiro continued to teach an old version of the kata (with the exception of the aforementioned modification made in recent years by Itosu), Yabu continued to modify the kata over the years. However, although thanks to Miyagi's testimony reported in Karate-do (also confirmed by the aforementioned Chibana article) we know that it was Yabu who carried out the teachings, while Itosu merely made some corrections from time to time, it cannot be established with certainty whether these changes came from one or the other. The trend of recent years has led to think that Yabu was very conservative and that he did not love the Pinan too much, but the collected documents show instead that he made several changes in various kata, also changing positions and techniques. The famous phrase attributed to him, reported by Gima in 1986: "If you have time to practice the Pinan, practice Kushanku instead", if it is true, could easily refer to the latest version of the scholastic Kusanku, kata that as we have seen in the previous article (see: https://karate-shorin-ryu-piemonte.webnode.it/news/the-kusanku-kanku-dai-of-miyagi-hisateru/) was taught precisely at Shihan Chugakko by Yabu, but not by his successor Tokuda.