The Jion kata is well known, and is practiced in almost every Shuri-te Karate school, however the history of this form, paradoxically, is much more uncertain than that of its two "brothers" kata, Jiin and Jitte (also the ideograms of the name and the consequent translation are uncertain, Funakoshi writes it in one way, Mabuni in another, but this topic will be treated in another article). Regarding the latter, in fact, Gichin Funakoshi himself (in a series of articles published in the Ryukyu Shimpo of 1914, and in Karate do Kyohan of 1935), explains how they arrived in Okinawa. These forms were in fact taught by a Chinese castaway to some practitioners of Tomari, specifically Jiin was transmitted mainly to Gikei Yamazato and Jitte to Bokunin Nakazato. Subsequently these kata spread in the area, however the Jion kata does not appear in the list of forms taught by the castaway (the other two mentioned are Chinti and Chinto).
Over time, several theories on the origin of this form have developed, Funakoshi in his books linked it to the famous and homonymous temple in Japan, however no clues emerge that can connect it to some monk of the aforementioned temple, if not the initial technique, the typical Chinese greeting with the right hand in a fist joined to the left hand that wraps the other in front of the chest. A nickname of the famous Karate expert Choken Makabe was actually "Jion", however there is no evidence of any kind that can connect it to this famous character, indeed, to be precise there are no traces of this kata before the early 1900s. The only certain thing is that this kata is undoubtedly connected to the Jiin and Jitte kata, with which it shares the initial position, the so-called “monk greeting”, and the great majority of techniques.
Some even, seeing the kata Maezato no tekko, thought that it was originally a kata to be performed precisely with the tekko (Okinawan metal brass knuckles), however this is not the case. Shinken Taira, famous reformer of Okinawan Kobudo, organized the techniques learned by various masters with this weapon and used the Jion kata learned from Funakoshi as a basis for building a kata capable of transmitting these techniques, giving it his name (Maezato was his original surname). Some sources also link the Jion kata to Gojushiho, and in fact an analysis of the form allows us to grasp some similarities between the two kata, as if Jion incorporated some principles of the much more advanced Gojushiho kata. It is not excluded that it was Anko Itosu who created it, it would not be the first time that the renowned master performed an operation of this type, just think of the Pinan which are a condensation of higher kata principles, proposed in a simplified form. There is, to my knowledge, no written evidence that directly links Itosu to Jion, although he certainly knew Jitte (see 1930's Kenpo Gaisetsu by Mutsu Mizuho and Jisaburo Miki) and most likely Jiin, having studied with both Mashin Gusukuma and Kosaku Matsumora, eminent masters of Tomari, and thanks to his work these forms were not lost and are still preserved, obviously modified on the basis of his experiences and tactical convictions, as was the custom at the time (just think about Rohai, reworked in three versions). However, some rumors, which are still being investigated (not least Minoru Higa of the Kyudokan Shorin-ryu school), would link the creation of this form to Kentsu Yabu (probably under the supervision of Itosu himself): in fact, Yabu's predilection for kata Gojushiho may have led him to rework the kata Jiin and Jitte for school teaching at the Shihan Gakko (the teaching institute), to which he added elements of Gojushiho to condense the study of two kata into one, and starting to introduce the principles of Gojushiho in a more simplified form. Moreover, it should not be forgotten that the course for teachers had a limited duration of 5 years, and that school teaching had led the teachers to reorganiza the old traditional teaching methods.
Although sometimes there is a tendency to connect this form to Yabu's close friend, Chomo Hanashiro, who presented it directly in the book Karate-do Taikan (G. Nakasone, 1938), and although some consider this version to be "original", this information is well far from certain! In fact, Hanashiro taught in middle school, and his Karate, handed down thanks to Kanzo Nakandakari, was mostly composed of scholastic forms, such as the modified Pinan (performed with closed fist). Let it be clear that this does not mean that his Karate was ineffective. He himself was a renowned expert, already a student of Sokon Matsumura, so his Karate was also the result of his experiences and tactical beliefs.
Basically, we can identify three "versions" of the Jion kata, one of which is undoubtedly the oldest, and two probably contemporary as a transmission line. For this short article we will analyze only two indicative techniques, to try to temporally place these three versions. 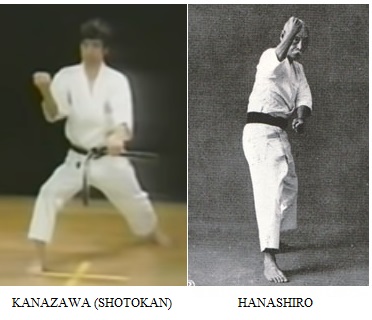 The first technique is precisely the initial one, the so-called "double defense". In reality we know that originally this technique did not exist, in fact the version of Kentsu Yabu handed down in the Toon-ryu school of Juhatsu Kyoda (student of Kanryo Higaonna, who incorporated this form learned directly from Yabu), as well as the version taught by Chozo Nakama (direct student of Choshin Chibana), and the version presented in the first book of Funakoshi of 1922 Tode Jutsu (as well as in the re-edition of 1925 Rentan Goshin Karate Jutsu) provide only one technique: chudan defense for Funakoshi, jodan defense for the other two. Subsequently Funakoshi introduced the double defense in the version that appears in Karate-do Kyohan of 1935 (almost certainly following contacts with his colleagues Kenwa Mabuni and Kanken Toyama), and so we also find it in all the schools that originated subsequently from Funakoshi (eg . Wado-ryu by Hironori Otsuka, Jinen Shindo-ryu by Yasuhiro Konishi). This double technique is also present in the versions handed down by Kanken Toyama (Shudokan), Choshin Chibana (he taught it to some students, including Takeshi Miyagi), Katsuya Miyahira (Shidokan Shorin-ryu), Kenwa Mabuni (Shito-ryu), etc.
The Shubukan Shorin-ryu school of Joki Uema and the Seibukan Shorin-ryu school of Zenpo Shimabukuro, on the other hand, perform the double block not chudan-gedan but jodan-gedan. We know that Zenpo learned the kata from Chozo Nakama, a friend of the family; it is possible that at some point Nakama himself added the gedan technique for uniformity with the other schools, since the version he learned only included the jodan technique, or it could be an internal modification in the Seibukan school, as happened for other kata imported from Nakama. We do not know exactly from which of his countless masters Joki Uema learned the kata, however, considering the evident similarities between Chozo Nakama's kata and those of Shinpan Gusukuma, it is very likely that the founder of the Shubukan school learned it from this last one, one of his main masters.
In the Hanashiro school, the first technique is a jodan-gedan defense, however the position is not frontal but withdrawn. This peculiar version was also transmitted to Yuchoku Higa (Kyudokan Shorin-ryu), with some adaptation changes (the position is not identical to that of Hanashiro). 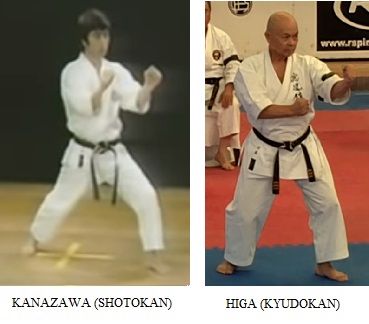 Regarding Hanashiro's version, let's quickly analyze the second technique, also indicative of his relationship with Gojushiho. Immediately after the first technique, in fact, all the mentioned versions of Jion provide for the execution of a kakiwake-uke. All, except the version of Hanashiro, which provide for the execution of a technique that resembles a guard position, specifically similar to the meoto-de kamae. Well, this particular technique (known as tsuki-uke) is present in almost all of Hanashiro's kata, replacing techniques such as the aforementioned kakiwake-uke, shuto-uke, etc. Now, considering that we find this technique immediately after the first Gojushiho's technique (in some versions), and considering that as regards the Gojushiho kata it is easier to establish the chronological order of the various versions, it can be assumed that since in the more recent ones the kakiwake-uke was replaced by the tsuki-uke, the Hanashiro's version of Jion is more recent than the others that use the kakiwake-uke.
These brief reflections must also make it clear that, contrary to many rumors that Yabu and Hanashiro would have disagreed with Itosu regarding the changes made, and their Karate would be much older and more effective as they were already students of Sokon Matsumura, this is not true. They also modified their Karate extensively, in the wake of Itosu's work, albeit maintaining some peculiarities, which in no way detracts from their Karate, nor that of their master.
In conclusion, we can argue with some certainty, regardless of all the unsubstantiated rumors that circulate about this kata, that it is most likely a school form developed by Yabu and / or Itosu, to condense the more interesting parts of Jiin and Jitte kata into a single kata, enriched by some elements taken from the Gojushiho kata.