Gojushiho  (54 steps) is considered by many schools to be the most advanced kata of Shorin-ryu even if, given its purely Chinese origin, it would be more properly defined as Naha-te / Shorei kata, as it was probably imported from China during the course of 1800. Tradition attributes the introduction of this form to Okinawa to Sokon Matsumura. The well-known master would have studied this kata in China during one of his travels in the 1800s, presumably with the military attaché Iwah. There are already some articles on this topic, including that of Olaf Steinbrecher, but in light of the new details discovered thanks to the research conducted in recent years, we have decided to write a new article. We also thank Matteo Muratori (https://my2centskarate.com/) for allowing the consultation of his personal copy of Kenpo Gaisetsu.

There are numerous written sources on this kata, starting with an article of 25 January 1911 in the Ryukyu Shimpo newspaper, which describes a martial arts performance (Shihan-ko no Tode Taikai 師範校の唐手大会), during the which the kata was performed by Kentsu Yabu, a student of Matsumura and Itosu, as well as a teacher at the Shihan Gakko (teaching institute). Yabu performed the same kata, his specialty, also in the performance reported in the article of March 21, 1918 by Ryukyu Shimpo (Tode no tatsujin-tachi 唐手の達人達). The kata is also mentioned in some of the first Karate books, precisely by Gichin Funakoshi in Ryukyu Kempo Tode (1922) and in Rentan Goshin Tode Jutsu (1925. This is an updated version of the first text), and by Choki Motobu in Watashi no Tode Jutsu (1932), however neither of the two masters includes it in their official curriculum. This form is mentioned among the kata studied at the Shotokan dojo in the book Karate Nyumon (1943), with the Japanese name of "Hotaku" (phoenix or, according to some sources, woodpecker), although this new name will not take hold, and the kata will once again be called by its old name. Instead, the first book where the kata is also shown by some illustrations is Kenpo Gaisetsu (拳法 概 説), written by Mizuho Mutsu (Mizuho Takada) and Jisaburo Miki. There are also at least three written sources that confirm the fact that this kata was taught by Sokon Matsumura. In this case we find this information in the articles: 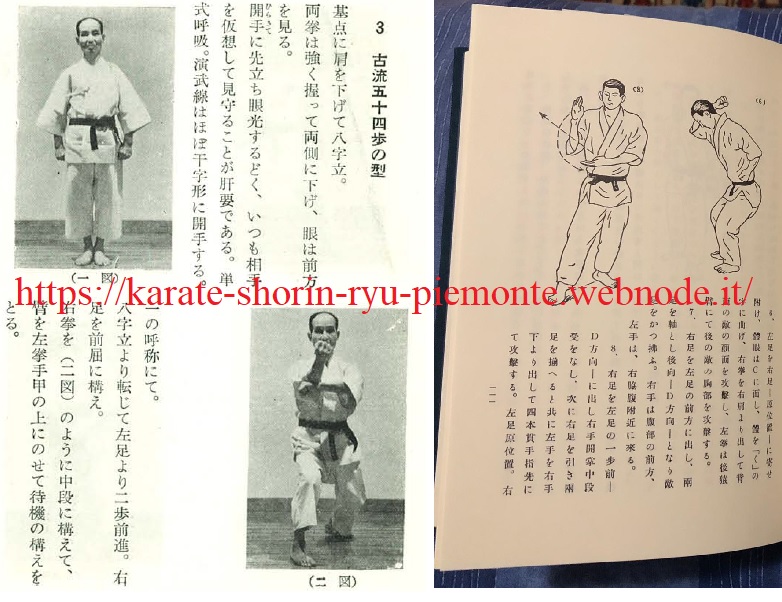 Let us now briefly analyze, as far as possible, the various versions of this kata, bearing in mind that Karate masters have often modified their kata, even several times over time, for many reasons (e.g. to adapt them to the context in which they had to transmit them, or to modify them on the basis of martial knowledge acquired in the meantime). For this reason, each teacher may have handed down multiple versions.