Given the recent increase in interest in this kata, and also given the various requests received regarding some clarification on the use of the Sanchin kata in Shuri-te, as well as the incompleteness and some errors in the information recently released on the Italian pages of the social networks (facebook, Youtube, etc.), we thought it's appropriate to write this short and concise article. We remind you to click on the words written in blue, in order to view articles and / or videos connected to them.

The Sanchin 三戦 kata (literally: three battles / three conflicts) is considered the basis of various styles of Karate, especially those most influenced, or directly arrived, from southern China such as Chojun Miyagi's Goju-ryu, the Kojo-ryu of the Kojo family (of which only a few secondary derived schools exist, being the main lineage now extinct. Source: Kojo family), the Ryuei-ryu of the Nakaima family, the Isshin-ryu of Tatsuo Shimabukuro and the Uechi-ryu of Kanbun Uechi. It is the first kata to be learned, since the main purpose is to build a strong and robust physique, learn grounding and abdominal breathing, the use of hara (tanden), together with creating a greater union between mind and body. This form cannot be traced back to a precise historical period, however it came and is still practiced in many styles of southern China, especially in He Quan 鹤拳 (Crane Fist), in Wuzu Quan 五祖拳 (Five ancestors Fist) and in the Taizu Quan 太祖拳 (Great ancestor Fist).

As already said this kata is a Chinese form, whose name is written with the same ideograms (三戦) used in Okinawa and Japan, but whose pronunciation is different depending on the Chinese geographical area in which it is practiced. Recall that in China, in addition to the official Chinese language, there are hundreds of linguistic variants and dialects. San Zhan is the pronunciation in Chinese, but the pronunciations San Zheng, Sam Chien, Sam Cian (in Fujian) and San Tsien (in Fuzhou) are not uncommon. Not only is this taolu (Chinese form) performed differently depending on the style or school (while still remaining recognizable), but there are different variations of this form, sometimes practiced even within the same style. In fact, San Zhan / Sanchin is part of a group of fundamental forms (which in Japanese we could define Kihon kata) defined in some styles as "battle forms", whose purposes are the same as those described in the introduction above. If we take Taizu Quan for example, we find among these forms San Zhan 三戦, Zhima Zhan 直马戦, Tian zi Zhan 天字戦, Pingma Zhan 平马戦, Shizi Zhan 十字戦, Wuhu Zhan 五虎戦, the Tiandiren Zhan 天地人戦, the Fengwei Zhan 凤尾戦, the Ruihua Zhan 瑞华戦, and the Longtou Zhan 龙头戦. Changing style, sometimes, the kata / taolu is called differently. For example, in Wuzu Quan the Shizi Zhan 十字戦 is called San Zhan Shizi 三戰十字 (three battles cross pattern), noting the fact that the majority of these forms are actually variations of the basic San Zhan. In Okinawa, as shown by the various studies conducted so far, there are only different versions of two of these taolu, San Zhan (Sanchin) and San Zhan Shizi (Seisan. For info click here for the related article), although according to the authors, other katas could derive from Chinese battle forms, in particular some "Naha-te kata".

THE MAIN SANCHIN OF KARATE

Below we will talk about some of the forms of Sanchin practiced in Karate: 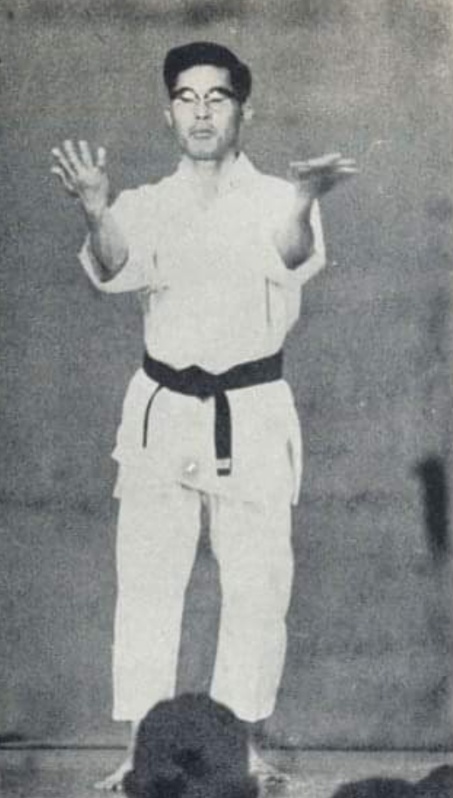 Naihanchi (Tekki in some Japanese styles) is the fundamental kata of Shorin-ryu, and is also present in the styles derived from it (eg Shotokan, Shotokai, Shito-ryu, etc.), although in these latest styles it has lost its role. Just like Sanchin, Naihanchi is also a formative kata, although like some versions of San Zhan it is also useful for studying practical combat techniques, suitable for short-range combat. The origins of Naihanchi are unknown, but  there are many theories about its "roots".  This topic will be addressed and deepened in future volumes of the Encyclopedia of Shorin-ryu Karate. Although according to prof. Xinhui Wen the origins of this form are to be found in the Dazun Quan 达尊拳 (one of the styles that are part of the Wuzu Quan), it is also possible that it was part of the Chinese "battle forms" set and, therefore, of the San Zhan family (although later modified in Okinawa). One version of "San Zhan" in particular has similarities with Naihanchi: Pingma Zhan. Some movements of this taolu, including some techniques crossed in front of the body and the horse stance, are very reminiscent of the Naihanchi kata (which was originally performed in shiko-dachi). His name also refers to the horse stance that characterizes it.
To date, there are three Naihanchi (shodan, nidan and sandan. The last two created by Anko Itosu), which form a mini-set of "battle kata", thus mirroring the set of battle forms found in some Chinese styles. It is also curious that, just like the battle taolu of the Taizu Quan, the three Naihanchi are not taught one after the other, but inserted at certain moments of the practitioner's training, interposing other forms of different nature among them (eg Pinan, Passai, Chinto, etc). This modus operandi causes these battle forms prepare the practitioner for what he will learn from the forms (okinawan kata or Chinese taolu) that he will study later.

For more information you can read:

"Shorin-ryu Karate: The legacy of the bodyguards of the king of Okinawa" (here)

"The legend of the masters of Okinawan Karate: Biographies, curiosities and mysteries"  (here)