Last month I wrote the article KARATE NI SENTE NASHI, IS THERE REALLY NO FIRST ATTACK IN KARATE?, in which I mainly reported and interpreted what was written on the subject by Funakoshi sensei, Motobu sensei and Nagamine sensei. Thanks to further research, as well as the numerous comments received, I have found two other noteworthy writings which I will present below:

There is a precept [which reads] Karate ni sente nashi. If well understood, this indicates the mental attitude of not being eager 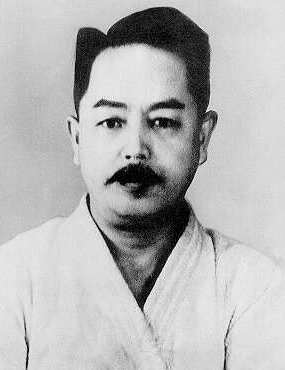 or inclined to fight. It teaches us that having trained in Karate does not mean that you can hit or kick others rashly. There seem to be two kinds of misinterpretations regarding this precept, and I would like to correct them. The first is a misunderstanding by some people who are not Karate practitioners. These people say: "In all fights the opportunity for victory is seized by getting the jump on the enemy; a passive attitude as sente nashi is therefore incompatible with Japanese Budo". Such a view forgets the essential purpose of Budo: Bu [武] has as its ideal the stopping of a spear, and its purpose is the maintenance of peace. Those who make such claims do not understand that the true spirit of Japanese Budo is not being belligerent. In front of someone who breaks the peace, or who will do damage, one is like a warrior in a battle, and therefore it is logical that one should getting the jump on the enemy and prevent his violence. This action does not in any way go against the precept sente nashi. The second is a misunderstanding found among some Karate practitioners. It is a vision that does not see sente nashi as an attitude, but rather as an strict rule of behavior to be strictly followed. As stated above, when absolutely necessary, when one is already facing a battle, it is an accepted strategic truth that one should try to use sensen no sen, and prevent the actions of the enemy. In conclusion, the expression Karate ni sente nashi should be properly understood in the sense that a person who practices Karate must never assume a bellicose attitude, trying to provoke a fight; he should always have the virtues of calm, prudence and humility in dealing with others. 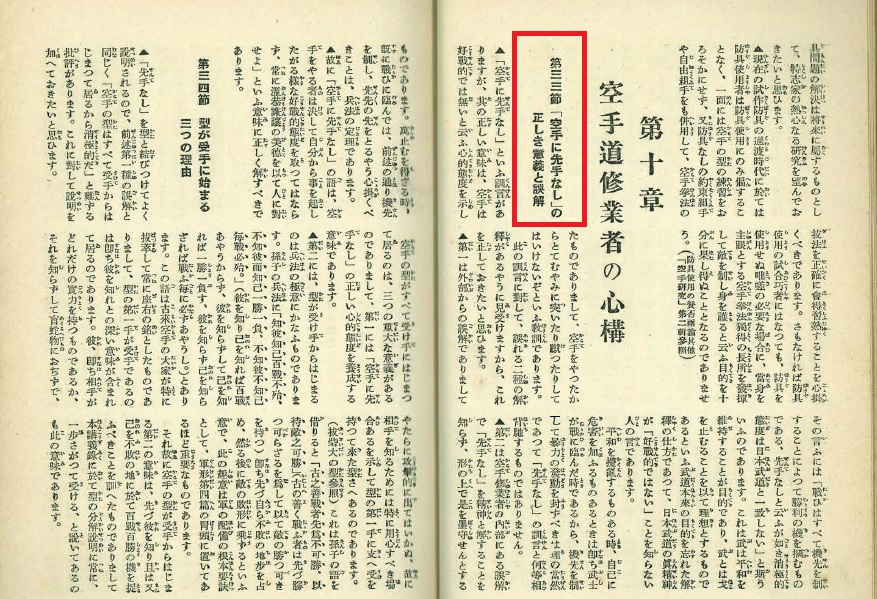 It is often said that there is no initiative in Karate. This expression means that it is essential to know how to take the initiative

when a confrontation occurs, nevertheless having a loyal and strong spirit, and that when circumstances require it, one must know how to overwhelm one's opponent. If you have trained hard every day, at the desired moment you can face the unexpected, and use your hands and feet in a natural way, automatically. It is there that we see how daily training bears fruit.

Also in this case, as in the previous article, the two texts derive from different sources. The text of Mabuni sensei comes from the aforementioned book, while that of Chibana sensei comes from an article that appeared in Ryukyu Shimpo.
Mabuni sensei gives a long detailed explanation, also disproving (as Motobu sensei in part did) two misinterpretations of this principle. It is also interesting to note the explanation of the kanji Bu. Chibana sensei explains the difference between starting / provoking a fight, and knowing how to take the initiative when, on the other hand, the situation requires it. In addition, he explains how it is in that particular moment that the effectiveness of daily training manifests itself.
In general, both texts are in harmony with what is reported in the previous article, but still contribute to having a broader and more detailed picture on this topic.
I would like to close the article with the words of Dante Alighieri which, although they were obviously not written with this intent, are well suited to the topic:
“Considerate la vostra semenza:
fatti non foste a viver come bruti,
ma per seguir virtute e canoscenza.”

(Consider your seed [origin]: you were not made to live like brutes, but to follow virtue and knowledge.)
Extract from Hell, canto twenty-sixth