The kata Kusanku, the versions of which mainly practiced today are the kata Kusanku (dai and sho) and Chatan Yara Kusanku, is one of the characteristic kata of Shorin-ryu / Shuri-te. Many legends have arisen about this kata related to characters such as the aforementioned Chatan Yara (alias Li Dao), Tode Sakugawa (alias Teruya Kanga) and the Chinese martial artist mentioned in Oshima Hikki (1762): Kushanku. On the latter I would like to say a few words, as the name of the kata derives from him. In the Oshima Hikki, a text written in Kanbun (ancient Japanese), there is the following paragraph:
“The other year, a man named Kushanku, who was Chinese and was a practitioner of Kumiaijutsu, performed a public demonstration in which his students attempted to overwhelm him. With little effort the man used hand and foot techniques to overpower his much larger opponents. " (reference text: Oshima Hikki scan at Ryukyu University)
From these few lines the human imagination has given rise to the most imaginative connections with the various characters mentioned above. We do not know whether the event took place in Okinawa or not, although it is plausible to believe it, given that the narrator (Shiohira Peichin) was assigned to the tax missions to Satsuma (Japan), and not to Fuzhou (China). If the narrated event had taken place in Okinawa, it could have taken place only in 1756 (the previous mission took place in 1719), during the investiture mission of King Sho Boku, led by the imperial tutor Quan Kui and his deputy Zhou Huang, to which must be added the calligrapher Wang Wenzhi, and an unspecified Grand Officer / Minister Zhou Wengong. Also, in Oshima Hikki there is a lot of talk about this mission and Quan Kui, especially a few lines before talking about Kushanku. In 1756 Chatan Yara was 16 (or 17, according to the Japanese count), while Tode Sakugawa was not yet born (the “official” date of birth is 1786, as reported on the Shuri-te monument erected in Shuri).
The question of the name of the kata is far from resolved, although today we are led to think of a posthumous homage to the Chinese character mentioned in the Oshima Hikki. We will return to the history of this kata after examining the technical part.

Are the techniques, principles and strategies of this kata of Chinese or Japanese origin? The similarities with Chinese martial arts are quite evident, as can be seen from the images below, in particular there are comparisons with some styles of Wuzu quan (the boxing of the five ancestors), a martial art that had an undoubted influence on okinawan Karate. The image (gif) shown below is very interesting, as the technique performed seems almost identical to that of the Kusanku kata.

However, the influence of Japanese martial arts is also present in Okinawan Karate, especially in the oldest style linked to Okinawan martial arts, the Shorin-ryu / Shuri-te. The various masters of the past have always stressed the fact that everything that came from China was considered of superior quality, so it is plausible to think that identifying all Karate as Chinese, ignoring the indigenous roots and influences of Japan, or other kingdoms, it was a mere strategic move designed to enhance the nobility of this martial art. In any case, the influence of Japanese Jujutsu cannot be ignored, as has also emerged from recent studies. Kata Kusanku also contains some of these techniques and strategies. I have selected a technique (but there would be many) of Daito-ryu Aikijujutsu which is identical to an application of the Kusanku kata. As can be seen from the image (gif), it seems almost extracted from the kata.

The same position is also described as Shiten no Kamae in Gikan-ryu Koppojutsu. 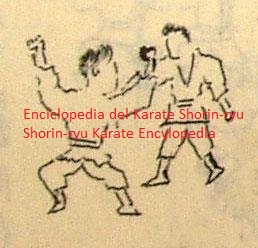 I also selected some rare images from a 1926 Jujutsu and Judo manual, written by Carlo Oletti (Turin, 1886 - Genoa, 1964). Carlo Oletti is the father of Italian Judo. In 1928 and 1934 the Judo centers created by Carlo Oletti were visited by Kano Jigoro sensei, who also gave lectures. Kano sensei congratulated him a lot for the work done by my fellow citizen, who had started practicing aboard the "Vesuvio" ship, anchored in Shanghai. Oletti was a chief gunner in the Italian Royal Navy. As can be seen from the images, these techniques are very reminiscent of possible applications of the ura-gamae of the kata Kusanku, and in fact they are very similar to some of them.

According to the historian Nakamoto Masahiro, master of Shorin-ryu and Kobudo, the creator of the kata Chatan Yara Kusanku was Li Dao, i.e. Chatan Yara. Also according to Nakamoto sensei, the family originated from Yara Peichin (aka Li Yuan), whose father was originally from Nanjing (China), and who married the daughter of Kodama Sukeuemon in Satsuma (Japan). Li Yuan was their fifth child, and began working at the age of 14 at the Ryukyu Kariya (embassy of the Ryukyu kingdom) in Kagoshima, at the time when it was visited by Prince Kunigami Masanori of the Ba clan. The prince asked the Satsuma clan to take Li Yuan into his service, and took him with him to the Ryukyu. He returned to Japan at the request of the Satsuma clan at the age of 43, but the Ryukyu kingdom asked the clan to change Li Yuan's nationality, so as to allow him to return to the Ryukyu. Having accomplished this, he was appointed stewart at the Yara estate in Chatan, as well as entertainer of the people from Satsuma. Li Dao (Chatan Yara) was a member of the fifth generation of this family, who took care of the royal family's (Sho) horse ranch in Chatan. After living in the capital (Shuri), in 1905, following the abolition of the clans, the family returned to Chatan, where they lived.
According to folklore, Chatan Yara Kusanku would be the original kata from which the other versions would derive, however there is no evidence of this. The family lived in Shuri until 1905, where some members could had learned the kata. The kata was in fact learned by Kyan sensei from a descendant of Chatan Yara generations after the latter's death, which could easily mean that the kata was learned in more recent times or, if Nakamoto sensei's thesis is true, it could mean that the kata has been modified over time, as happened to several other forms (eg Passai). Furthermore, the name Chatan Yara Kusanku made its first appearance in 1939 during a performance by Nagamine sensei, and its second in a text by Mabuni sensei dated 1941, as evidenced in an article by Andreas Quast. It is therefore difficult to say that this is the original kata, and that the other versions derive from it.
Today, in addition to the versions mentioned above, there are less practiced versions such as the Kusanku Mei of the Matsumura Seito Shorin-ryu, the Tachimura no Kusanku practiced at the Bugeikan and the Chibana no Kusanku handed down by the schools derived from the Shudokan, and today made famous by sports competitions. The Ufukun of Motobu-ryu, on the other hand, is a version of Kusanku dai.

So is it a Chinese or a Japanese kata? It is actually an Okinawan kata, as also specified by Yabu sensei and Chibana sensei:
“If we were to name martial techniques specialists, as regards martial arts directly deriving from China, the name of Matsumura with his Gojushiho would be on all lips; while Ishimine with his Passai and Kusanku, just like Oshiro with his Passai and Kusanku, both represent the native Okinawan martial arts…” Yabu Kentsu, Itosu no buyuden (1915)
“About two hundred years ago, martial arts experts Sakugawa, known as a master of Chinese arts [Tode], and Yara of Chatan, introduced Chinese techniques into the original kata, thus obtaining the current kata.”
Chibana Choshin, Karate-do (1953)
“One hundred and fifty years ago some Shuri-te experts, namely Chatan Yara, Sakugawa and Matsumura, went to China where they learned martial arts, and then returned to Okinawa. The kata of Shorin-ryu were born from the union of Ti from Okinawa with the martial arts of Shaolin.” Chibana Choshin, Watashi no Karate (1966)
In fact, one must not forget a very important thing when we talk about Karate: it is chanpuru, that is, an original art made up of different "ingredients". Various martial arts from various empires and kingdoms have influenced Okinawan Karate, making it what it is today. However, we must not think of a jumble of techniques taken at random, but of a slow elaboration, developed over time by skilled masters who have been able to give the martial art what it needed, integrating the gaps with new techniques, and eliminating elements superfluous and redundant. Kata Kusanku is an example of this, and the various similarities that can therefore be found with other martial arts are therefore natural.