VERSION 1: Chibana Choshin / Mabuni Kenwa / Gusukuma Shinpan
VERSION 2: Mutsu Mizuho / Funakoshi Gigo
The Kusanku sho kata is a typical form of the Itosu Anko sensei lineage. Created by the latter, although it incorporates some techniques and principles of the Kusanku (dai) kata, it is distinguished from the latter by the presence of some typical techniques. The soto-uke / tsuki sequence present at the beginning resembles, although in a simplified way, the beginning of the Seisan kata; while the typical kata technique, often applied as joint manipulation on the wrist, is very similar to the technique found in the kata Kusanku of the Soken Hohan lineage. This kata also contains many techniques in which the Meotode principle is present (husband and wife hands), as well as techniques where the same arm is used to defend (deflect) and counterattack. Both principles belong, according to what was written by different masters, including Motobu Choki, to the old way of doing Karate. However, since this is a kata created by Itosu sensei, this once again denies the claims of this master's detractors, who reduce all his work to a mere simplification of the martial art, which would therefore have lost its effectiveness and nature.
To date, there are two main versions of this kata. The first is the one spread by the masters Chibana, Gusukuma (Shiroma) and Mabuni, while the second is the one present in the books Kenpo Gaisetsu (1929) and Toudi Kenpo (1933) by Mutsu Mizuho (who learned it in Okinawa), which corresponds to version practiced today in Karate JKA (Shotokan). The first will be named VERSION 1, while the second VERSION 2.
The first difference between these two versions is the lineage. Chibana, Gusukuma and Mabuni were direct students of Itosu sensei, while Mutsu was a Karate practitioner from mainland Japan, as well as a member of the Tokyo University Karate Club (Tokyo Teikoku University Karate Kenkyukai). On a technical level, VERSION 1 is characterized by the extensive use of the ukiashi-dachi position, in contrast to the use of kokutsu-dachi and zenkutsu-dachi of VERSION 2; another difference between the two versions is the presence of the manji-uke performed before the morote-tsuki in VERSION 2, a technique absent in VERSION 1, where instead we find a vertical and semicircular movement performed with the arms, before the aforementioned double tsuki technique (whose applications include defense and counterattack with the same arm); the kata continues in VERSION 1 with a chudan technique of defense and counterattack performed with two hands, which in VERSION 2 is replaced by a jodan-shuto + jodan-uke typical of the Kusanku dai kata; in both versions there is a 360° rotation (in the JKA version the rotation is accompanied by a jump), at the end of which a chudan-shuto is performed on the right guard; subsequently in VERSION 1 is performed the chudan-shuto, and then the side kicks (which strike in the same way as a mae-geri), while in VERSION 2 you do not advance, and you have to perform the sequence of side kicks (sokuto-geri); we find another difference in the 360 ​° rotation, since in VERSION 2 it is preceded by a right mikazuki-geri, kick not present in VERSION 1. There are obviously other minor differences, but it did not seem necessary to report them in this article. 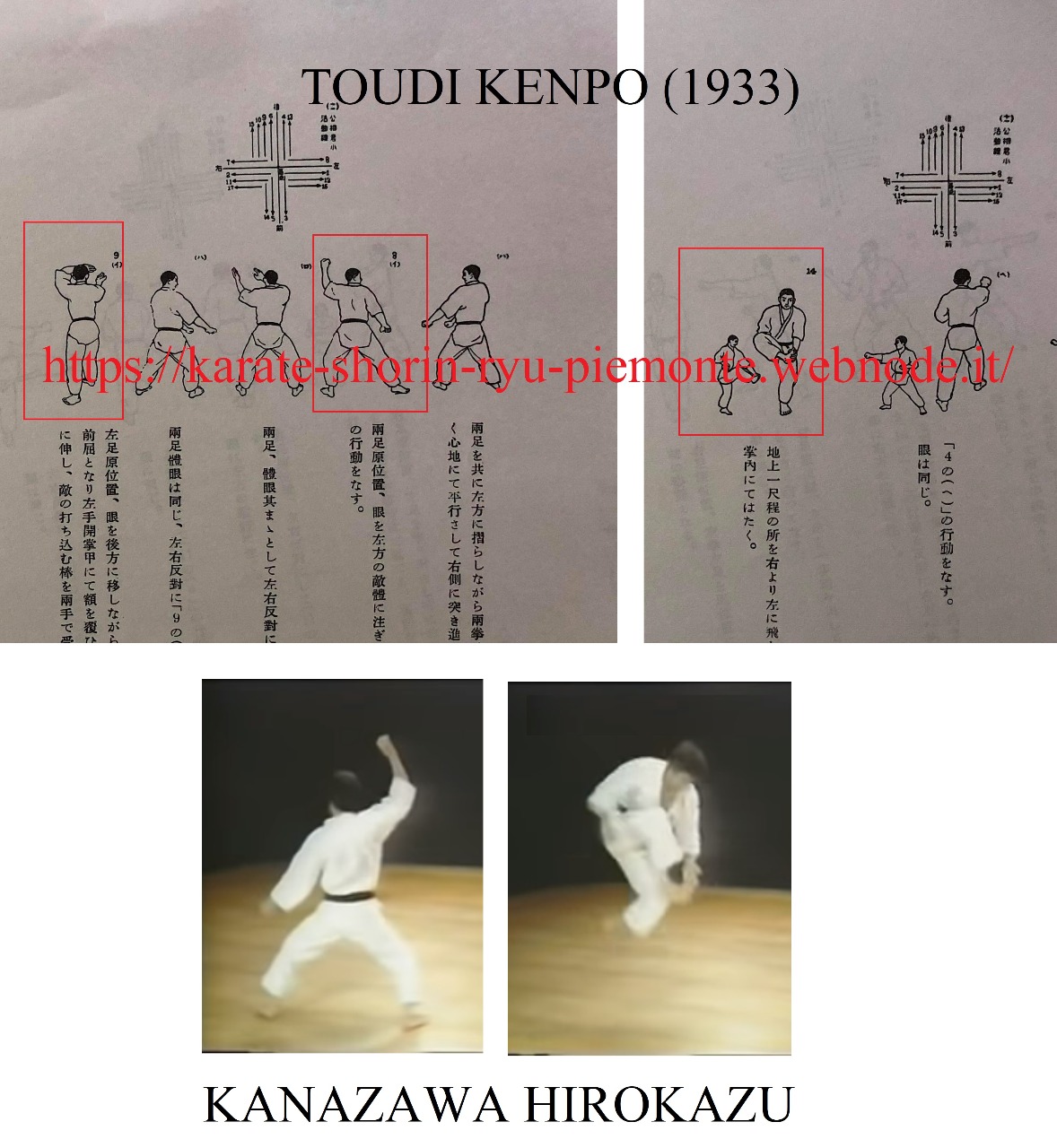 As mentioned above, Mutsu learned the kata following a trip to Okinawa. Unfortunately, he does not specify who he learned this kata from (if anyone was in possession of this information, please correct me), but he cites a number of masters that he and Miki Jisaburo would have met during their stay on the island. Among them, the only two who could have taught him this kata are Yabu Kentsu and Oshiro Chojo, both belonging to the Itosu lineage, and both taught Karate in different schools on the island, including Shihan Gakko. Funakoshi Gigo may have learned it from both Mutsu and Okinawan sources, exactly like the Passai sho (see article) . Gigo's version was then integrated into Karate JKA (Shotokan), after making some changes. 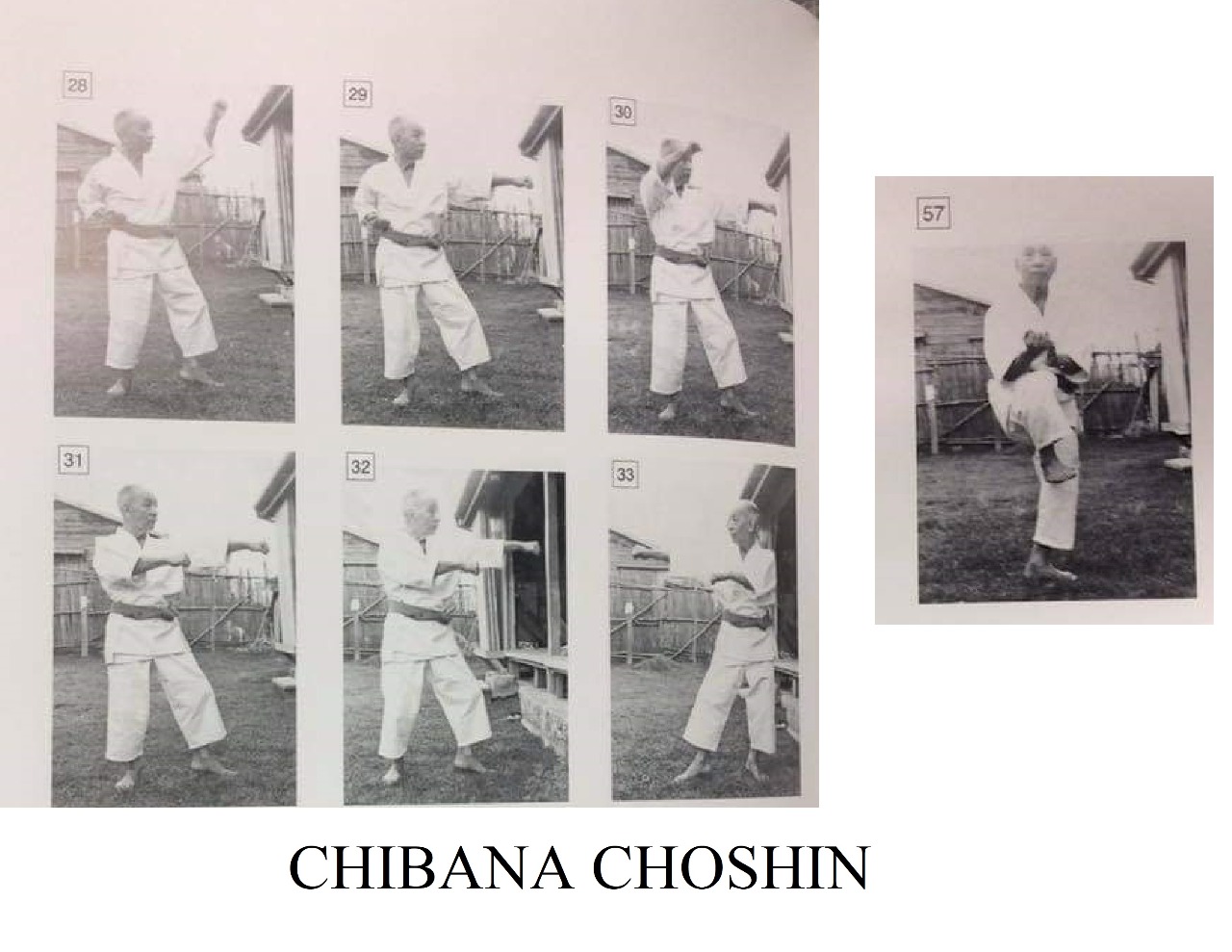 As for VERSION 1, we know that Chibana learned it directly from Itosu, while Mabuni could (the conditional is a must) have learned it from Chibana and not from Itosu, just like in the kata Matsumura (Tawada) no Passai. Furthermore, Kanazawa Hirokazu, in his book The complete kata, wrote that this kata was above all preserved and transmitted to posterity thanks to the work of Chibana sensei.
It is plausible to think that VERSION 2 is a version present in the public education environment. Miyagi Hisateru, in his book Karate-do (1953), says he learned the kata Kusanku dai and sho. Although he later attended other masters in "mainland" Japan, we know that he studied at Shihan Gakko under the guidance of Yabu sensei and Itosu sensei. Consequently, it is almost certain that he learned Kusanku sho in school. In addition, he mentions a third Kusanku, performed by Yabu sensei during a karate performance in Hawaii. It is a hybrid kata, which combines the dai and sho versions, and which adopts the tsuki-uke instead of the shuto-uke, as happened in many kata modified for the teaching of the schools (see article). From what can be deduced from the text, Miyagi did not know this kata, it is therefore possible that it was a version introduced after 1916, that is, after the death of Itosu sensei (1915). This would confirm what has already been amply demonstrated, namely that Yabu sensei and Hanashiro sensei simplified school Karate in accordance with Itosu sensei and that, indeed, they continued this work even after the master's death. It also confirms another fact already introduced in other articles: many masters modified their Karate over and over again in their life, thus giving rise to different versions. Furthermore, all this demonstrates how Karate of the Itosu-Chibana lineage is very different from school Karate. It is also curious to note that this third Kusanku (or at least a very similar one) was also handed down by Hanashiro sensei, and that it arrived in the Bugeikan school where it is practiced.
Below is an informal translation of the text in Miyagi Hisateru's book:
“Yabu Sensei performed the kata Kusanku which combined Sho and Dai that we had learned. In Yabu Sensei's version all shuto-uke have been replaced by tsuki-uke. I think this was how Yabe sensei improved the kata, and it was a good idea."