Relations between China and Okinawa began in 1372, when King Satto of Chuzan (1320-1395), one of the three kingdoms of Okinawa, met with Chinese envoys. Chinese envoys arrived in Chuzan in 1372, demanding the admission of Chinese cultural supremacy and for Okinawa to send representatives to Nanjing. Satto complied with these requests without hesitation, as this would have granted him the formal license to trade with the most powerful nation in the entire region. He sent his younger brother Taiki to Nanjing in 1374, as the head of a mission to formally submit to China, thus initiating tributary and commercial relations. 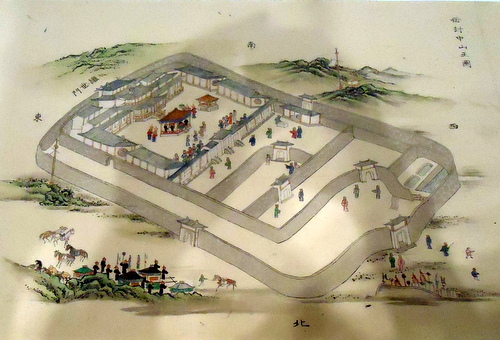 The Chinese investiture ceremony in Shuri Castle, as depicted in a 1788 hand painting by Yamaguchi Suio. Sakamaki-Hawley Collection, University of Hawaii Library.

Emperor Hongwu (i.e. the first emperor of the Ming dynasty, Zhu Yuanzhang) received the embassy of the kingdom of Chuzan, accepted their gifts and in turn sent various gifts to Okinawa, including a royal seal which served as a symbol of investiture. A Chinese official accompanied the return mission by representing the Chinese Imperial Court, and officially confirming Satto as King of Okinawa, thereby legitimizing the claims of the kingdom of Chuzan over those of Nanzan and Hokuzan, although these kingdoms had not yet been conquered. Although Okinawa was never invaded, or annexed to China, this custom of investiture of the king of the Ryukyu by the Chinese court would continue, just like the tributary relations, until the Ryukyu Kingdom was dismantled five centuries later.

Satto also founded the Chinese immigrant community of Kumemura (Kume village) in 1392, a short distance from the capital, Shuri. These Chinese married and interacted with the Okinawans, and Kumemura grew to become a center of Chinese studies, whose inhabitants have served the kingdom for centuries as diplomats, interpreters, etc.
On the death of Satto, his son Bunei came to power, who had a headquarters for Chinese traders built near Naha, and which was legitimized by the Chinese court in 1404, through the delegate Shi Zhong. The reign of Bunei was short-lived as Sho Hashi, who was an anji (lord of a territory) rebelled in 1402, and finally overthrew Bunei in 1406, putting his father Sho Shisho on the throne, who was recognized as king by the Chinese in 1408.
Sho Shisho, first king of the Sho dynasty, reigned until his death in 1421. Meanwhile his son conquered the kingdom of Hokuzan in 1416, annexing this territory to the newly born Ryukyu kingdom. The kingdom of Nanzan fell to Sho Hashi in 1429, effectively uniting the whole kingdom of the Ryukyu. According to some historians, it is therefore to be considered Sho Hanshi, and not Sho Shisho, the first true ruler of the Ryukyu kingdom. Sho Hashi was heavily inspired by the Chinese model, and made changes to his reign, not so much to impress the Chinese court, but to consolidate the kingdom itself.
Although the investiture missions were conducted within an ideology of submitting the Ryukyu kingdom to Chinese centrality and superiority, the kingdom actually had authority in determining when investiture missions would be required and whether to accept them. Envoy Chen Kan reports in the book Shi-Liuqiu-lu that Okinawans had the right to refuse Chinese envoys should something break their protocol. When Sho Nei took the throne in 1587, the requests for investiture came in 1590, coinciding with the invasions of Korea by the Japanese Shogun Toyotomi Hideyoshi. Concerned about the dangers posed by Hideyoshi's fleet, the Ming Emperor hesitated to send out a full mission. The Ming court suggested an investiture ceremony by proxy, by sending Okinawan ambassadors to Fuzhou, or by sending a small military contingent to perform the ceremony in Okinawa. The Okinawan court protested, as only a traditional investiture would respect their protocol. Eventually the Ming emperor gave in and sent a full investiture mission in 1606, led by sapposhi (in the Okinawan language, Chinese envoy) Xia Ziyang.