After requesting the investiture from Peking (Beijing) in 1621, 1625, 1626 and 1627, Sho Ho finally received the investiture in 1633. This was the last mission sent by the Ming dynasty. In fact, Beijing, the capital of the Ming dynasty, fell to the invading Manchu army in 1644, marking the beginning of the Chinese Qing dynasty. However, Ming loyalists continued to hold out in southern China and Taiwan for several decades.
Kin Ogen led a mission to Nanking in 1644, to communicate the death of King Sho Ho to the Ming Emperor, requesting the investiture for King Sho Ken. Facing the newly appointed Emperor Hongguang, Kin Ogen informed the Ryukyu Kingdom of the succession to the Ming throne, who sent a second mission, led by Mo Daiyo, to congratulate Hongguang on his appointment. Hongguang died the following year, and the Prince of Tang then rose to power, claiming himself as the Longwu Emperor. The Ryukyu kingdom then sent a new mission, led by Mo Taikyu, who met the new Emperor in Fuzhou, always with the aim of congratulating the new ruler. However, while Mo and his entourage were in Fuzhou, the Fujian city fell into the hands of the Qing forces, led by the Manchu Prince Bolo. The Ryukyu Kingdom then sent two diplomatic missions to Beijing, in order to formally request the investiture of Emperor Shunzhi (third of the Qing dynasty, and first to reign from Beijing over united China). However, the Emperor, along with the Council of Rites, refused to grant the investiture until the Ryukyu Kingdom returned the royal seal, which had been granted to the kingdom by the Ming dynasty. By returning the seal, the kingdom would thus prove that it was no longer loyal to the Ming, and that it would no longer have to deal with the loyalists and pretenders to the throne of that dynasty. 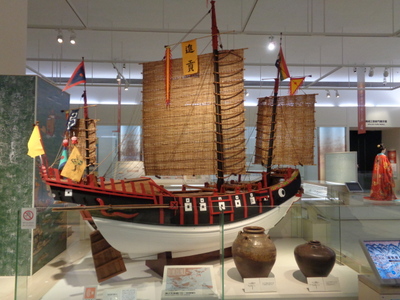 Model of an Okinawan tribute ship (shinkosen) at the Okinawa Prefectural Museum
For a time, King Sho Ken maintained loyalty and relations with the Ming, in part due to economic issues, such as the expressed willingness of the Ming to resume the raw silk trade. Chinese envoy and interpreter Xie Bizhen traveled alongside the Okinawan envoys to China numerous times, trying to persuade the kingdom to sever ties with the Ming loyalists, and to enter into relations with the Qing dynasty. Sho Ken was replaced by his younger brother Sho Shitsu, after his death in 1647, who was finally persuaded to send a delegation to Beijing. In 1651 a mission was then sent led by envoys Ma Zongyi and Cai Zuolong, who were sent to congratulate the Emperor Shunzhi on his rise to power, to deliver the seal and the Imperial Rescript received by the Ming, and to request a new seal and a new Rescript by the Qing. Prince Sho Tei, heir to the throne of the Ryukyu, also participated in the mission. The new seal and the new Rescript were finally sent to the kingdom on 15 june 1654, via the return journey of the first tributary mission, sent from the Ryukyu kingdom to the Emperor of the Qing dynasty in 1653, but did not reach Okinawa.
According to some sources, however, Sho Shitsu did not request the investiture from the Qing Emperor, nor that a Qing embassy come to his kingdom. However, the aforementioned mission would seem to have been sent by the Qing, with the task of going to the kingdom of the Ryukyu, in order to clarify the position of the kingdom towards the Qing authority. The embassy, led by Zhang Xueli and Wang Gai, traveled from Fuzhou together with Xie Bizhen, Ma Zongyi and Cai Zuolong, but was unable to reach the Ryukyu, as it was blocked by the naval forces of Zheng Chenggong, who was at head of the Ming loyalist forces in Taiwan.
Emperor Shunzhi died in 1661, and he was succeeded by Emperor Kangxi, who again ordered Zhang and Wang to go to Okinawa to perform the official investiture of Sho Shitsu, and to deliver him a new Imperial Rescript from the Qing. The two envoys arrived in Naha in 1663 together with Cai Zuolong and Xie Bizhen (Ma Zongyi had died in 1659), surprising the officials of the kingdom, who had not requested any investiture, and who had not been informed of the arrival of the Chinese envoys. Furthermore, Shuri Castle had been destroyed by fire in 1660, and thus the kingdom was particularly unprepared to formally receive this Chinese delegation. However, the investiture nevertheless took place, and thus the tradition of investiture missions of the Ryukyu kings by the court of the Chinese Empire was re-established. According to studies conducted by the Director of the Okinawa Prefecture museum, Dana Masayuki, it was on this particular occasion that the Ryukyu court adopted the music used by the Qing dynasty. From that moment, and until the nineteenth century, the Qing always sent envoys of higher rank than the delegates sent by the previous dynasty. This gesture could be interpreted, and some scholars agree on this, as a greater consideration of the Kingdom of the Ryukyu by the Qing, than did the Ming dynasty.