On November 17, 1668, King Sho Shitsu died, who was replaced by his son Sho Tei, who was officially crowned on January 11, 1670. According to Liao Zhenpei, music typical of the Qing dynasty was played for the first time on this occasion, during an official ceremony of the Ryukyu Kingdom. The investiture by the Chinese court took place instead in 1683, through a mission led by the examiner of the Imperial Hanlin Academy, the Sapposhi Wang Ji (known in Okinawan folklore for being the creator of the kata Wanshu. This hypothesis is almost completely denied by several studies), officer of the Qing dynasty. Sho Tei had traveled long before he succeeded his father, both in Kagoshima and in Peking (Beijing), and during his reign were built the Confucian temple of Kumemura and the Uchaya udun (tea house palace), renamed by the aforementioned Wang Ji the "garden of the east". The garden was built in the Ryukyu style, and included a viewing tower and a tea room. It served to entertain Chinese and Satsuma envoys, and was destroyed in the 1945 Battle of Okinawa.
As mentioned above, the investiture of Sho Tei was led by Wang Ji, who remained in the islands for five months, where in addition to conducting the investiture ceremony, he produced numerous calligraphies for the castle of Shuri and for the various Buddhist and Confucian temples. On his return to China he composed two volumes on the Ryukyu: the Zhongshan yángé zhì (中山 沿革 志, "Report on the successive changes of Chuzan"), and the Shi liúqiú zá lù (使 琉球 雜 錄, "Various reports on the mission in the Ryukyu").
Sho Tei was followed by kings Sho Eki (reign 1709-1712) and Sho Kei (reign 1713-1751), and it is precisely during the reign of the latter that some noteworthy events took place. On 09 september 1719 the Kumi odori was performed for the first time in front of Chinese envoys, a new form of acting / dance, created by Tamagusuku Chokun for the entertainment of the Chinese envoys who came for the investiture of Sho Kei. During the visit of the Qing diplomatic mission, however, some unrest broke out between the Chinese, led by Hai Bao and Xu Baoguang, and the Ryukyu officers, led by Sai On (the king's adviser) and Tei Junsoku (famous in the world of Karate because it owes to him the first written test relating to Ti, the ancient Okinawan martial art from which Shorin-ryu / Shuri-te derives). The kingdom had only collected 500 kan of silver to purchase goods brought from China, but the mission unexpectedly brought in goods worth 2,000 kan, including jade, spices, porcelain, watches, antiques, and scrolls of calligraphy and painting by famous artists of the Song, Ming and Qing dynasties. Eventually, Sai On negotiated a deal, paying 600 kan for all the goods. The problem arose in part because the 1719 mission included 600 more people, including cartographers who had set out to map the archipelago. These unexpected guests also brought their own goods to sell, and when they were unable to sell all they had brought, the entire mission arranged to remain in the Ryukyu for another three and a half months, putting even greater financial pressure on the kingdom.
Before continuing, I would like to focus on Tei Junsoku (28 October 1663 - 08 December 1734). Also known as Nago ueekata Choubun, Miyazato peichin, or by his Chinese name Chéng Shùnzé, he was a Confucian scholar and government official of the Ryukyu kingdom. Born into the Kumemura scholar-bureaucrat social class, he spent four years in China as a young man, studying Confucianism and other subjects. His father, Tei Taiso, was also a well-known scholar and officer, and traveled to China as a member of at least two official missions. Tei Junsoku traveled several times both in China and in Edo, but in the world of Karate he is famous, as we have already said, because in one of his poems there is the first written test relating to Ti:
"No matter how you excel in the art of Ti,
and in your scholastic endeavors,
nothing is more important than your behavior
and your humanity applied in daily life." 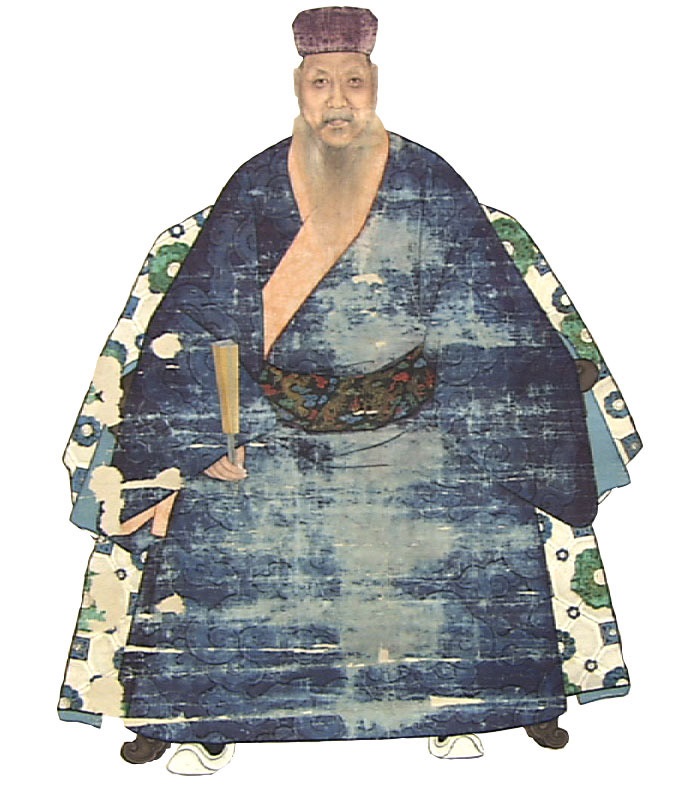 Tei Junsoku
Upon Sho Kei's death, his eldest son, Sho Boku, who reigned from 1752 to 1794, received the Chinese investiture in 1756, ascended the throne. This time the Chinese mission was led by the imperial tutor Quan Kui and his deputy Zhou Huang, to which must be added the calligrapher Wang Wenzhi, and an unspecified grand official / minister Zhou Wengong. During his time in Shuri, Chou Huang wrote the Ryukyu-koku shiryaku, an account of the history and customs of the Ryukyu kingdom, based on the records and reports of previous Chinese envoys, Okinawan documents, and Chou's own observations. On the way to Okinawa, after departing from Fuzhou, the two main ships were destroyed by a storm, and the envoys and their entourage risked drowning. The ship carrying the envoys crashed on the rocks of Kumejima, where the passengers were rescued by the islanders. The other ship, however, was rejected as far as Zhejiang, and its occupants had to travel by land to Fuzhou, where they took a new ship with which they arrive in Naha in the winter. King Sho Boku then voluntarily donated 50,000 ounces of silver as a refund for Chinese envoys.
During the stay there were some clashes between the Chinese and the Okinawans, which broke out due to the excessive emphasis in the attempts to force the sale of the goods transported by the Chinese. This led to the execution, beating, banning of several members of the Chinese embassy, as well as the deprivation of the title of Chou Huang, and the return of the Okinawan silver by the Chinese emperor.