Continuation of PART 6
Before moving on to the next investiture mission, that of 1808, I would like to talk about the scholar aristocracy, one of the administrative classes of the Kingdom of the Ryukyu. The families of the scholar aristocracy were divided geographically into four groups: Shuri (capital of the kingdom), Kume-mura (village founded in 1392 by King Satto to house Chinese immigrants), Naha (city of commercial port) and Tomari (other city port). Today they are all neighborhoods of Naha (Kume is located behind the Fukushu-en, while Tomari is still near the port), but at the time they were separate cities, between which were small villages, which also became neighborhoods by Naha. These families could boast an elite lineage and a first-rate education, and for these reasons their members were called to occupy all the administrative duties, and the leading roles of the kingdom.

We talked about lineage, understood as a family tree, but in what sense? In the kingdom there was a distinction between people, between possessors of a specific lineage (系持 chiimuchi / keimochi; lineage possessors), and ordinary citizens who could neither boast an ancestry nor a surname (無系 mukei; without lineage), but how to prove to other people that they belong to the first category? Thanks to 家譜 kafu. Kafu, also known as 系図 keizu, was a register written in 漢文 kanbun (a form of ancient Japanese, written with a rich use of kanji and using Chinese grammar rules), on which all the lineages of the families were recorded, the city ​​of origin, as well as the cursus honorum of the various individuals (including any trips to China, to Satsuma or to Edo), which was established in 1670 by Sho Shoken (although a rudimentary form of the same may have previously existed). In 1689 an office in charge of this registry was established (the keizuza), whose first administrator was Prince Sho Kotoku (尚弘徳, also known as 東風平王子朝春 Kochinda oji Choshun), fifth son of Sho Shitsu (尚質) and young brother of King Sho Tei (尚貞), who registered 687 main families, plus 36 families belonging to derivative / secondary branches. Of these families, many had common names, so 479 Chinese-style surnames appear in the register. A copy of these documents was in fact kept in the register, while another was delivered to the relative family with a royal stamp. Beginning in the 18th century, the register began to be reworked on the basis of the Chinese model, and since Japanese-style surnames were linked to the fiefdoms of families (and often changed), genealogies began to be recorded according to the family name, in Chinese style, grouping all those who were inside a specific munchu (門中, inside the doors), that is, who shared the same surname. A distinction was also added between the main families (大宗, da zong), and those belonging to secondary branches (小宗, xiao zong).

THE TASKS OF SCHOLAR ARISTOCRACY

What did the members of these families do? As we have already said, they were in charge of filling the administrative roles of the kingdom, but not all positions were accessible to everyone. The most important positions, in fact, were occupied by members of the scholar aristocracy of Shuri and Kume-mura (among these, the most important were always occupied by members of Shuri), while those of lesser importance were assigned to members of the scholar aristocracy of Naha and Tomari. Among the main families of Kume-mura we find Sai (蔡), Tei (鄭), Tei (程), Rin (林), Kin (金), and Ryo (梁), while one of the most important of Naha was the Bai (貝), also known as Fukuchi ke / Fukuji ke (福地 家). The highest role that a member of the Naha scholar aristocracy could aspire to was that of Omonogusuku osasu-no-soba, that is, in charge of the Omonogusuku 御物城 (royal warehouse and armory, located on an island in Naha), while others roles could include positions such as Naha's yokome (inspector); the role of satunushi of Naha (那覇里主); secretary (hissha) or administrator at the Oyamise (親見世), at the Shinoboseza (仕上世座), or at the satunushi himself; such as Satoza oyako or Satoza bujo (responsible for sugar imports and exports); Ufunitii bujo (responsible for what concerns ships); responsible for the Shinoboseza (仕上世座); or positions in the office of Zaiban bugyosho (在番奉行), the resident official of Satsuma-han (薩摩藩) in Naha; etc. Some of these positions were held in collaboration with a member of Shuri's scholar aristocracy on an equal footing. The role of secretary of Kume-mura was then added, previously accessible only to the scholar aristocracy of Kume-mura. 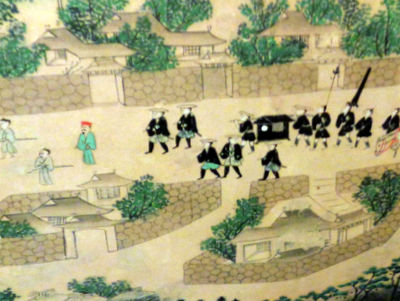 The Zaiban bugyosho with his entourage on the streets of Naha.

Often the aristocracy was referred to using the kanji 士 (shi), which according to the Confucian tradition means scholar-gentleman. In Japan this kanji was instead used to refer to the samurai caste (who wanted to appear as cultured scholars-gentlemen), this has therefore caused some confusion between researchers. Many encountering this kanji in use in the Ryukyu Kingdom believed that there was also a samurai caste there, and that therefore the scholar aristocracy was a warrior class like the Japanese samurai. Complicating this is the misuse of the term samuree, used as an Okinawanization of the word "samurai" to describe the kingdom's scholar aristocracy. Indeed, although the kingdom obviously had an armed force, the scholar aristocracy was very similar to the caste of scholar-bureaucrats typical of the Chinese Empire and the Confucian tradition, and therefore it can be deduced that it was much closer to the Chinese model than the Japanese one.

Any new born from the scholar aristocracy had to be registered with the office known as okumiza, regardless of whether it was a boy or a girl. Here he was also given a childhood name (童名 warabina). According to the regulation, registration had to take place no later than 17 days after birth, and if the parents were late in registering by submitting the necessary documents (生子 證文 shoshi shomon), they would be punished with incarceration at a temple (terairi) or with a monetary fine.
The children were educated from the age of 7/8 up to 14/15 years in one of the 21 village schools (mura gakkojo) in Naha, Tomari or Shuri, where they studied the Confucian classics, the "Three Character Classic" and "The Twenty-four Paragons of Filial Piety", as well as other classics (these schools also served as the local administrative office. To give an example, at the time of the fall of the kingdom the school of Wakasa-machi had a head teacher, 82 students, a nakadori and two hisshas). When the boy was about 15 years old, the parents, together with the rest of the family unit (ichimon) and the related group of families (kumiju 與中), submitted a request for permission to perform the katakashira yui, a ritual of initiation into adulthood, during which the boy was styled as an adult and given an adult name (nanori), as well as a very low grade (ikai) (子 shi or 仁屋 niya).
TO BE CONTINUED...