Continuation of PART 8
As we saw in the previous part, King Sho Ko retained his title until his death, despite having received permission from the Shogun to abdicate. The son reigned de facto from 1828 with the rank of sessei, and obtained the crown in 1835 thus becoming the penultimate ruler of the Ryukyu Kingdom, i.e. King 尚育 Sho Iku (1813-1847), who reigned until his sudden death, reached the age of 34. Sho Iku was a Confucian scholar and had devoted his life to education. During his reign, the Ryukyu experienced a financial crisis, as well as a big news: the opening to trade with Westerners. In fact, in 1844 a French ship arrived in Okinawa, and the kingdom began trading with France. Theodore-Augustin Forcade, a French priest sent by the Paris Foreign Missions Society, arrived in the Ryukyu to spread the Christian gospel, while Bernard Jean Bettelheim, a British Protestant missionary, arrived in 1846. Bettelheim established the first foreign hospital on the island in the Naminoue Gokoku-ji Temple (波上山護国寺 Temple for the Protection of the Nation, Mount Naminoue), which stood where the Shinto shrine of Naminue is today.
For his coronation, the Chinese emperor 道光帝 Daoguang (1782-1850), the eighth of the Qing dynasty and the sixth Qing emperor to reign over all of China, sent sapposhi 林 鴻年 Lin Hongnian (in Japanese Rin Kounen) and his deputy 高 人鑑 Gao Renjian.
According to Shugoro Nakazato sensei, among the sapposhi guards there was the master known as Ason, who would transmit the Naihanchi kata to Ufu Giko, who in turn would teach it to Matsumora Kosaku. The latter would then personally meet Ason during the last coronation of a king of the Ryukyu, which took place in 1866, with which he would deepen the study of kata. Also according to Nakazato sensei, the original name would have been Daipochin (this information emerged from an interview with Nakazato sensei in 2012). Personally, I recommend taking this information with a grain of salt, as there is no other evidence to support this thesis, which inevitably clashes with other historical research on the subject. Experience also teaches me to doubt easy solutions to historically complicated questions. Either way, it is my duty to mention it.

THE SAPPOSHI AND ITS VICE

Lin Hongnian [1805-1885 (字勿村) letter wuchun, originally from (福建省福州府侯官县) Houguan County, Fuzhou Prefecture, Fujian Province], while visiting the royal residence with the Shikina-en, gave to King Sho Iku a stone stele with the engraving "Gan li yan ling" (甘 醴 延 齢, "Sweet saké, long life"), as well as a calligraphic work of eight columns. This calligraphy work was later collected in the collection of Sho Masako, the sixth daughter of King Sho Tai, who donated it to the Ryukyu Museum during the postwar occupation period. Today it can be admired at the Okinawa Prefectural Museum. Back in China, in 1840 he was deputy examiner of the province of Shandong, and subsequently took care of the care of several museums, including the national history museum. In 1859 he then served as prefect of Lin'an Prefecture, Yunnan, and in 1864 he served as governor of Yunnan, participating in military operations against the Celestial Kingdom of Great Peace (Taiping Revolt). In 1882, three years before his death, he was awarded the title of 三品卿 Sanpinqing. 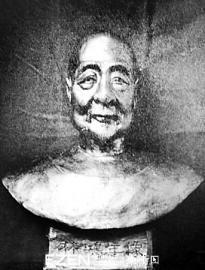 Bust of Lin Hongnian
Gao Renjian [also known as (仁 鑒) Ren Jian, (號 螺 舟) luozhou number, originally from (是 浙江 仁 和 縣) Renhe County, Zhejiang Province], after returning to China, became the prefect of Hengzhou, where he managed to stop a revolt in the city of 耒陽 的 Leiyang. Among other things, he was the teacher of the famous general 彭玉麟 Peng Yulin.
TO BE CONTINUED...