There are many versions of the Kusanku kata attributed to Yabu sensei, but not all of them are identical. Before listing the various versions, citing their sources, it is good to remember that this is mainly due to two important factors:

This version appears in the relevant video on Youtube (also available on our channel). This is the recording of a Karate performance, directed by Yabiku sensei and performed by some on the students, on 8 September 1951 at the Ginásio do Pacaembu in São Paulo (Brazil). In this case in the video appear Kokuba Gabriel, Kokuba Oscar and Toguchi Reiji, who perform various preparatory exercises, as well as the kata Naihanchi shodan, Gojushiho and Kusanku dai. Although the video does not show the kata in full, the Kusanku dai is the most complete of the three. From the video it is easy to understand how similar it is to Chibana sensei's Kusanku dai, albeit with some small peculiarities. Motoku Yabiku sensei studied at Shuri's Shihan Gakko from 1905 to 1910, studying Karate under the guidance of Yabu sensei and Itosu sensei from 1906, the year in which the latter introduced this practice at this educational institution. This, among those we will examine in this article, is the version that most resembles the Kusanku dai of Chibana sensei who, unlike the other famous students of Itosu sensei, did not attend Shihan Gakko, and therefore remained outside the influence of  school Karate. This can be explained by the fact that, with the passage of time, as already seen for other kata, the modifications increased, gradually leading to a Kusanku further away from the "original" version of Itosu sensei, which instead continued to be handed down from Chibana sensei. 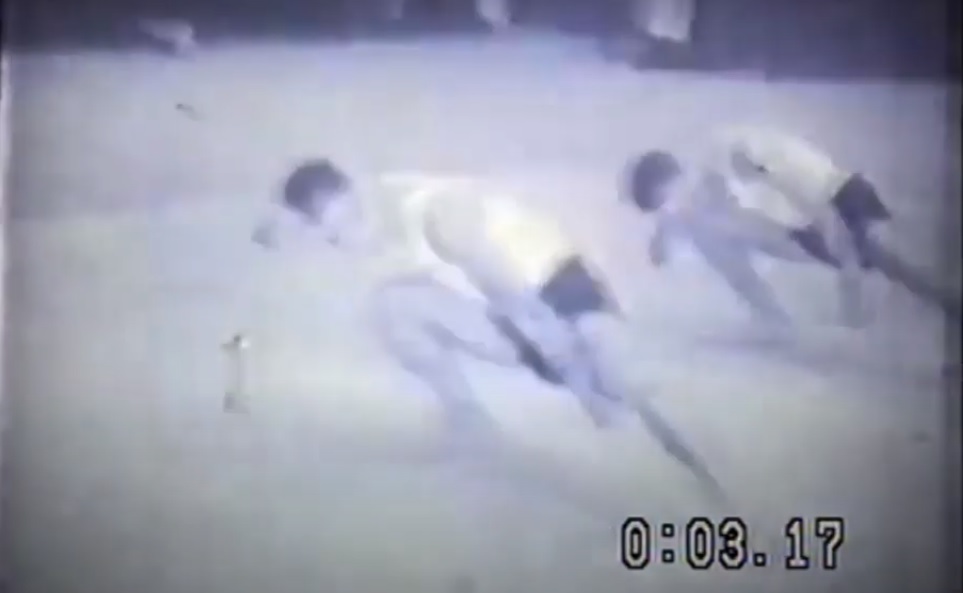 This version is almost identical to the previous one, except for some minor changes. Tokuda sensei studied at Shihan Gakko between 1906 and 1911 (the same years as Toyama Kanken sensei), always under the guidance of Yabu sensei and Itosu sensei. Unlike other practitioners trained at the aforementioned school, Tokuda himself became a teacher at Shihan Gakko, first as an assistant to Yabu sensei, then as a substitute for him. Tokuda sensei also taught at the Okinawa Prefectural First Middle school from May 1930 to 1945 (taking over from Yabu sensei in 1937). Having been one of the three Karate masters of Miyahira Katsuya sensei, this version is still handed down within the Shidokan Shorin-ryu school, as well as in the schools derived from it. Tokuda sensei, although a little known character today, was also part of the committee created for the creation of Fukyugata, in 1940. 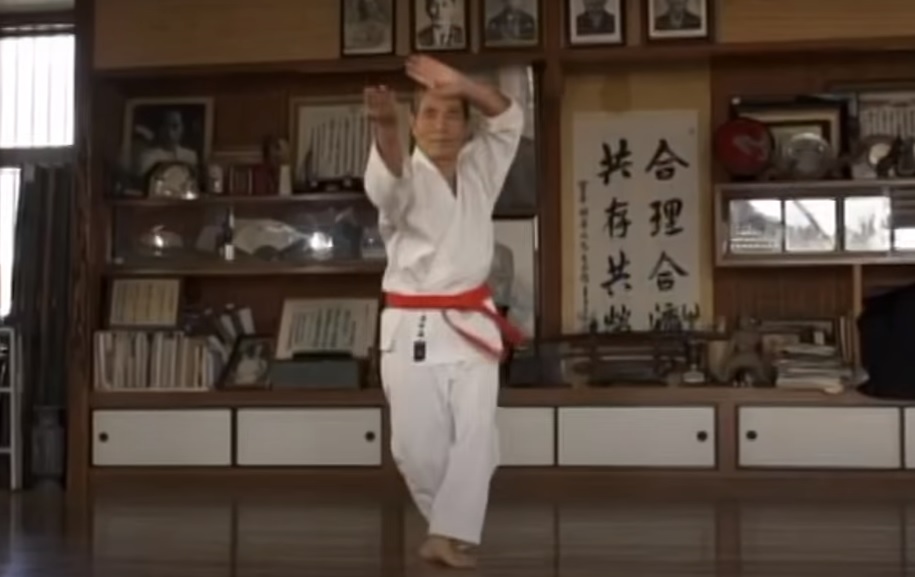 This version is much altered and simplified compared to the others. As already examined in the relevant article THE KUSANKU (KANKU DAI) OF MIYAGI HISATERU, it is a Kusanku dai altered to look more like kata Pinan. This kata appears in the book Karate-do, written by Miyagi himself, and published in 1953, which was followed by a 1955 reprint. Miyagi himself writes in the book that Yabu sensei was the main teacher at Shihan Gakko, while Itosu sensei was the senior teacher. In the book, Miyagi talks a lot about Yabu sensei, and how much he was admired and respected in Okinawa, both as a karateka and as a war veteran. This version of the kata is fully part of the simplification project of school Karate, by Itosu sensei first, and by Yabu sensei and Hanashiro sensei later, which will lead to another version mentioned by Miyagi in the aforementioned book, a hybrid version without the shuto-uke, which will be reviewed at the end of this article. Miyagi studied at Shihan Gakko from 1911 to 1916.
Kusanku dai, performed by Miyagi Hisateru sensei

In the same book there is also a photo of Kusanku sho, accompanied by its caption. Unfortunately it is the only photo that portrays Miyagi performing this kata, however the body position is almost identical to that used in the version of Chibana sensei. In the book, while Miyagi describes Yabu sensei's performance of "hybrid" Kusanku in Hawaii, he writes: "Yabu Sensei performed the Kusanku kata, which combined the sho and dai versions we had learned." So, from what can be seen, it is likely that Miyagi learned Kusanku sho precisely at Shihan Gakko, also because the version that was exported to "mainland" Japan is well documented in the books Kenpo Gaisetsu (1930) and Toudi Kenpo (1933), both by Mutsu Mizuho, ​​as well as handed down today in Karate JKA (Shotokan), and does not correspond to the position of the feet to the photo published by Miyagi. It is therefore almost impossible that the author later learned it in "mainland" Japan. All this leads us to think that Yabu sensei also handed down the Kusanku sho. On the other hand, even the modified and simplified version of the kata, later learned in 1930 by Mutsu Mizuho, ​​may have been taught to them by Yabu sensei. Unfortunately the author does not specify from whom he learned this kata, but makes a list of names of masters that he and Miki Jisaburo would have met during their trip to Okinawa, namely: Oshiro Chojo, Kyan Chotoku, Yabiku Moden, Miyagi Chojun and Yabu Kentsu. Of these, the only two from whom they could have learned Kusanku sho are precisely Yabu sensei and Oshiro sensei. 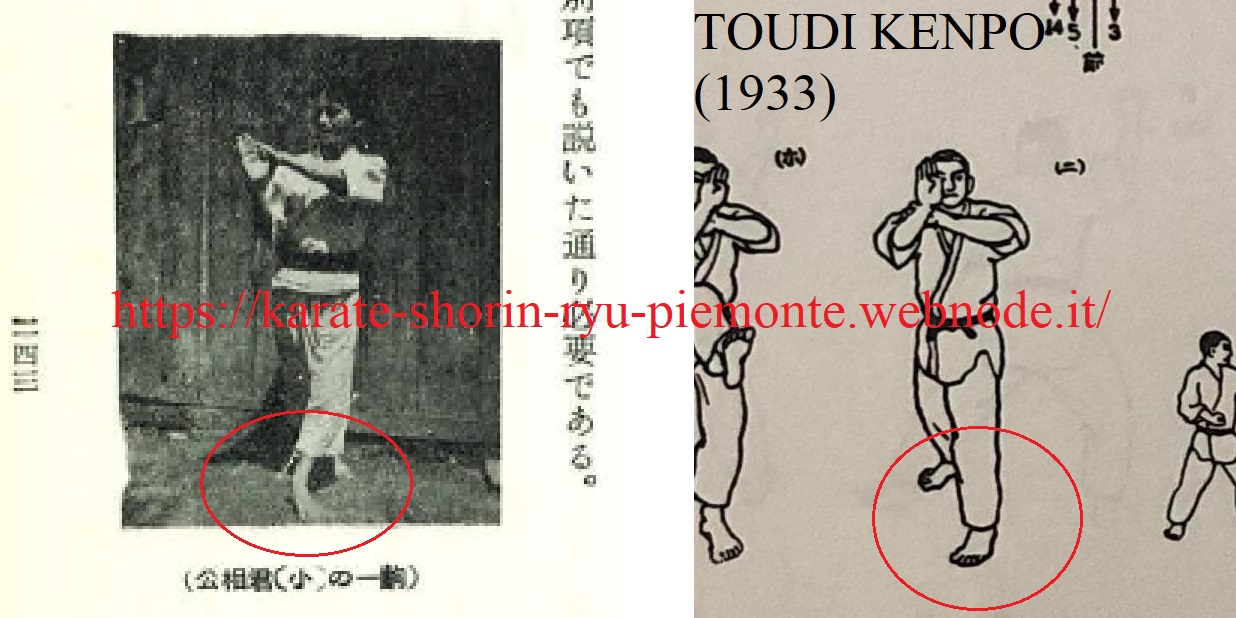 Shigeru Nakamura sensei studied with several masters, and among the kata he learned and passed on there is also the Kusanku (dai). According to some members of this school, this kata derives from Yabu sensei. However, examining the video of one of his famous pupils (Oyata Seiyu sensei), it immediately becomes clear that this version differs a lot from the others, although it is easily recognizable. In order to avoid mistakes, I asked Kyan Toru sensei (Okinawa Kenpo) whether or not the version of Oyata sensei corresponded to the one practiced by them in Okinawa, which was kindly confirmed to me in writing. I therefore believe that although Nakamura sensei may have learned this kata from Yabu sensei, it is highly probable that given the high number of teachers he attended, as well as the fact that he did not actually practice for years under the guidance of Yabu sensei, as they did the other karateka mentioned above, this version may be a personal interpretation of Nakamura sensei. This master is in fact famous for his attempt to unite all Okinawan Karate in one movement, without any style divisions. Although this project was not adopted by the other Okinawan masters, it nevertheless received appreciation from some of them, including Miyahira Katsuya sensei (Shidokan Shorin-ryu). 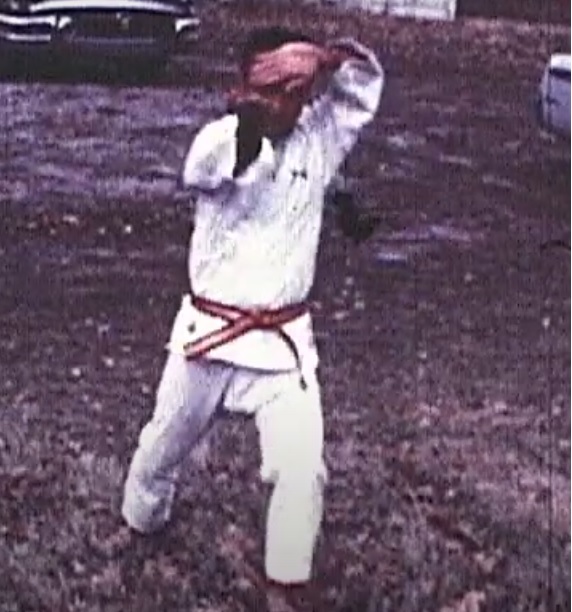 As mentioned talking about Kusanku sho, Miyagi Histaeru wrote that he had attended a performance of Yabu sensei's Karate, which was held in Hawaii in 1927. During the performance, Yabu sensei performed a particular version of Kusanku, which united the versions Dai and Sho, and in which the various shuto-uke were replaced by tsuki-uke. “Yabu Sensei performed the Kusanku kata, which combined the sho and dai versions we had learned. In Yabu sensei's version all shuto-uke have been replaced by tsuki-uke. I think this was Yabe sensei's way of improving the kata, and it was a good idea. […] Using the fist is better, as with the shuto-uke you run the risk of breaking your fingers, which is quite scary. " Unfortunately, this version is currently lost. However, by examining well what Miyagi wrote, it is evident what has already been demonstrated other times, namely that the introduction of tsuki-uke in kata is mainly due to the simplification of school Karate, and that therefore this version of the kata is perfectly in line with project carried out by Itosu sensei, Hanashiro sensei and Yabu sensei. Being that Itosu sensei died in 1915, and that Miyagi finished his studies in 1916 without having learned this particular version, it is evident that this kata is the work of Yabu sensei (and perhaps Hanashiro sensei), which confirms once again that this master was far from being a conservative as has often been depicted, but rather an innovator! Curiously, a version of Kusanku that partially corresponds to Miyagi's description is practiced at the Bugeikan school, but rather than deriving from Yabu sensei, it derives from Hanashiro sensei.